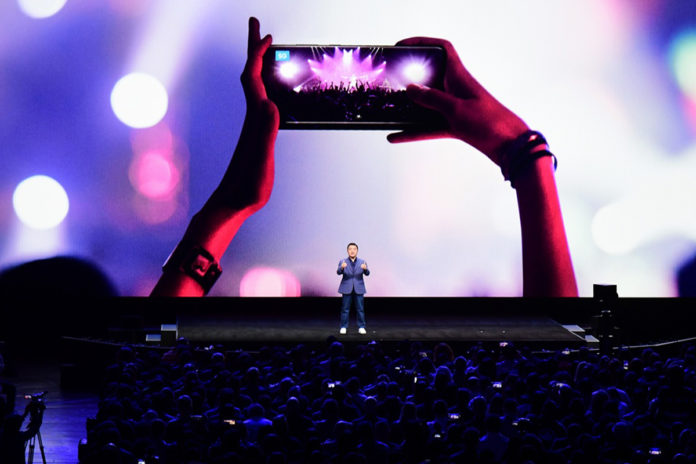 In a world-first, the entire event was captured #withGalaxy—all livestream footage came courtesy of the Galaxy S20, a new series of smartphones designed to fundamentally change the way we capture content.

This represents a new era for the smartphone, highlighting it’s now possible to have superior quality, broadcast grade software and hardware on your Samsung device.

“We shifted our livestream experience from one that utilised studio cameras to mobile devices to reflect millennials’ dynamic lifestyle,” explained Hyunmin Lee, show director at Cheil.

Bomi Lee, livestream producer at Cheil, added: “Millennials are a tech savvy demographic who utilise their smartphones on the go and rely on them to fulfil all manner of tasks day in, day out. With the livestream, we wanted to highlight how the Galaxy S20 and Galaxy Z Flip seamlessly complement their lives.”

Cheil’s show technical director, John Jeon, said: “It is a great achievement of many people. Over the last five months, from September to February, we were faced with numerous technical challenges. While not one of them was easy to tackle, our combined efforts as a team resulted in a seamlessly produced livestream and successful launch event overall.”

Other event highlights included the announcement of partnerships with Netflix – Samsung’s exclusive partner for mobile entertainment, and Thom Browne, which showcased that high fashion and high-tech go hand-in-hand. On conclusion of the launch, guests explored an experience zone where they could test out the all-new devices.

The launch, which was designed and produced by INVNT in partnership with Cheil, was an immense success overall, with the livestream, livestream replay and livestream highlights reel securing 55M views and climbing. Media exposure hit 9.8K between 11th-12th February, with a potential reach of 18.8m, meanwhile social reach over the same period was 2.6m.

Mike Kitson, chief production officer at INVNT said: “Working with Samsung and Cheil on our fourth Unpacked was a dream. We’re honoured to have been granted the opportunity to work on this milestone event and creatively showcase the content capturing capabilities of Samsung’s new S20 devices.”