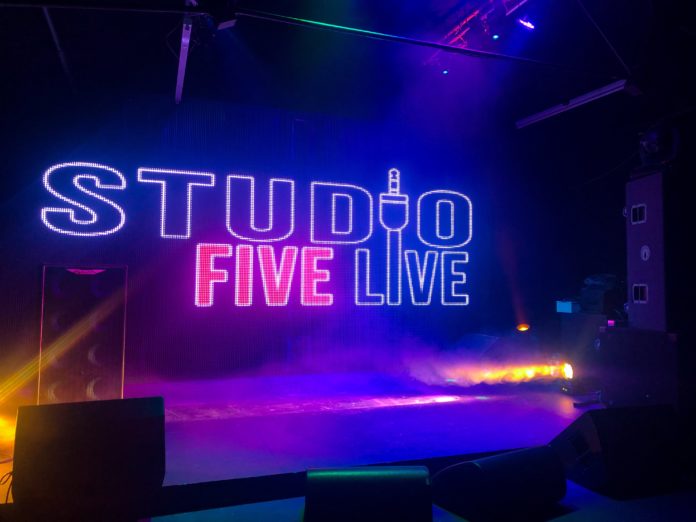 Universal Live has repurposed retired Pixelmesh stock by donating it to a local music hub a stone’s throw from their new head office in Keighley.

Following the technical production company’s move in 2021, their paths crossed with Jam on Top when both companies commissioned the same air conditioning company.

Ben Phillips, Universal Live’s Operations Director and Jam on Top’s owner Brian Leach sat down to find out a bit more about each other and all of what the two companies do, finding mutually benefiting ground from the get-go.

Universal Live are often in the position where they look at clearing space of kit that is no longer in use to make way for the latest and greatest technology. Instead of throwing away perfectly good and working kit, they would rather it go to a good home rather than to waste, deciding that on this occasion the Pixelmesh stock would be a perfect stage backdrop in the local music venue.

Initially showcasing the panels to Jam on Top, Universal Live went on to deliver and install 24 cases of Pixelmesh free of charge.

Speaking about their new kit Brian Leach from Jam on Top said:

“We were so glad we did and met a fantastic and friendly crew as well as a very impressive setup. We could not wait to see it all come to life. When it did the WOWs were bigger and better than ever.

Our users to the venue and rehearsal space just could not believe it and everyone started taking pictures and videos of it in action. ITS MASSIVE is the usual retort.

For us, it’s a game-changer and puts our venue to another level. We are still a bit emotional about how someone can be so kind as to let us take ownership of some state of the art equipment.

Thank you Universal Live you are the best ever!!!!!”