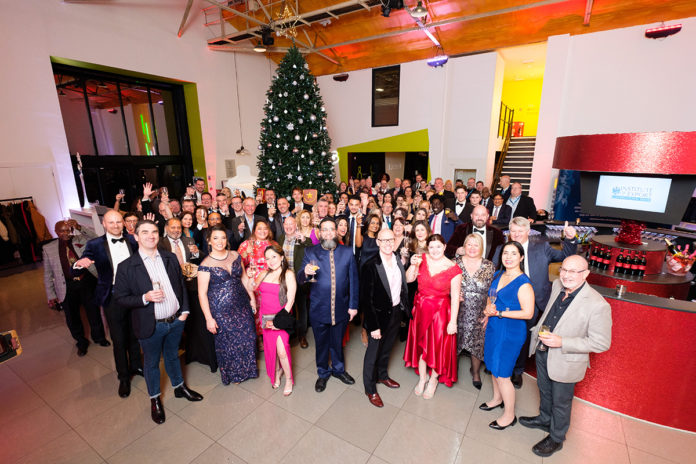 DRPG’s 212 studios were selected for the Institute of Export and International Trade’s first employee conference. After a year of virtual meetings, CEO Marco Forgione was keen to get the team together for a day of collaboration and a night of celebration. DRPG’s studios in Worcestershire acted as a large blank canvas. It also houses a purpose-built COVID-19 assessment centre and range of safety protocols, such as anti-viral misting machines and ventilation, making it the perfect venue for this event.

“The institute has seen dramatic growth in the last 12 months, moving from 20 employees to over 130, yet most had never met face to face. So, to have the opportunity to bring the team together made for a brilliant end to a great year,” said Forgione.

The day started with delegates being herded into Studio 3 from the outside world. Themed as a secret underground bunker, they accessed the space along a dark and intimidating tunnel. From the first minute, delegates knew this conference was going to be different. Once inside, the challenge was to bring alive IoE’s five new values using the images delegates had been asked to prepare two weeks earlier. The aim of this was to include the whole team in a celebration of everything that makes the institute great.

After a light breakfast, it was into the vision and strategy session hosted within Studio 1 and presented by the CEO. A light-hearted chat show with the Senior Leadership team followed, using another studio as the green room where the SLT could play up to the camera before being invited on stage.

The afternoon was split into two important sessions. The first took the delegates on a journey through the next five years of Institute of Export’s strategy, with each team portraying the SLT and having to respond to challenges and opportunities. The sessions saw the board becoming judges, as a raft of innovations and ideas were developed by the delegates.

The second session of the afternoon was both emotional and uplifting. Partnering with the Lightbulb charity, teams worked together to build prosthetic hands. DRPG have worked with the charity to create the session on several occasions due to its rising popularity for corporate team building.

“It takes team building to another level. Delegates are working together to create a real positive change to someone’s life. Completed hands are taken to parts of the world where amputations are a real problem. The hands are fitted by trained doctors and have changed the lives of over one million recipients over the last two years” said DRPG’s CEO, Dale Parmenter, who hosted the session.

Delegates were both excited and humbled by their achievements, as they were transferred to their hotels to freshen up. During this time, the studios underwent a fabulous transformation and delegates were greeted by the sight of a spectacular dining room for the awards dinner upon their return to the Hartlebury Head Quarters. The group finished off celebrating in the nightclub studio where they danced into the night.

The event was a complete success, exceeding the delegates and the Institute’s expectations. Everyone left the event buzzing, each with their own plan and commitment for the next 12 months and, albeit rather tired, still very proud of their achievements.