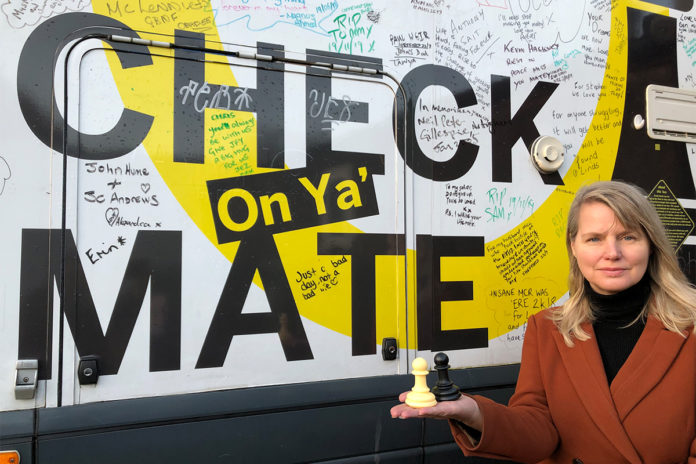 London’s QEII Centre has partnered with Bright Hygiene to spearhead a drive to tackle mental health issues in hospitality and events with the intention of actioning real change in the way organisations and individuals handle workplace wellbeing.

The leading events venue is partnering with commercial kitchen cleaning specialist Bright Hygiene, pioneer of social enterprise 5asideCHESS’s Battling Suicide Bus, to bring the bus to Westminster as a stage for mental health discussions with a difference.

The initiative calls for stakeholders from across the hospitality and events industry to meet and identify the root causes of the issues which lead to mental health problems and suicide, with the proviso they pledge tangible support for industry-wide solutions to improve the situation.

While awareness of mental health issues within society is on the rise and initiatives have begun to be implemented, research shows that large numbers of individuals working in the events and hospitality sectors are struggling and support services can be hard to access. Too often people are falling through the net.

According to Royal Society for Public Health’s Service With(out) a Smile report, one in five hospitality workers suffer from work related severe mental health issues, while 84% of hospitality workers reported increased stress, believed to be a direct consequence of their job.

Data from the Office for National Statistics also shows that suicide in the hospitality is up to 10% higher than average.

The first candid discussion will involve frontline staff, such as event planners, chefs and front-of-house staff who will share their experiences and thoughts on mental health issues and their causes before discussing ways they, and their employers can help improve the working environment.

The second discussion will bring together senior members of staff and industry leaders who will discuss the issues faced in the workplace, but more importantly, present solutions which they will pledge to back and implement.

Diane said: “I’ve worked in the event and hospitality industry for over 30 years. Both sectors are high-pressured environments which can lead to those working in them becoming stressed and developing mental health problems.

“It’s good that there has been increasing openness of mental health issues in recent years. However, through my involvement with 5asideCHESS’s Battling Suicide Bus over the last two years, I’ve spent a lot of time talking to people who are suffering and I am very aware that we still have a long way to go if we are to improve outcomes for those struggling with their mental health. I’ve learned that you really don’t have to scratch very far below the surface of any of us to discover that we all have battles to fight, whether they are our own, or those of people we love. That’s as true for me as it is for anyone else.

“That is why we at QEII are collaborating with stakeholders to bring about meaningful change in the industry. Where mental health is concerned, talking and listening are good, but action is better. We can’t just create tick box solutions which protect employers but don’t help those who are suffering. Together we can make a difference”

The Battling Suicide Bus, which travels around the UK and has been signed with more than 300 messages to loved ones lost to suicide, will be parked outside the QEII Centre in Westminster on Friday 20th March.

With space limited to six seats for each discussion, QEII will carefully select applications with priority given to individuals and organisations who share the same passion for making a change.