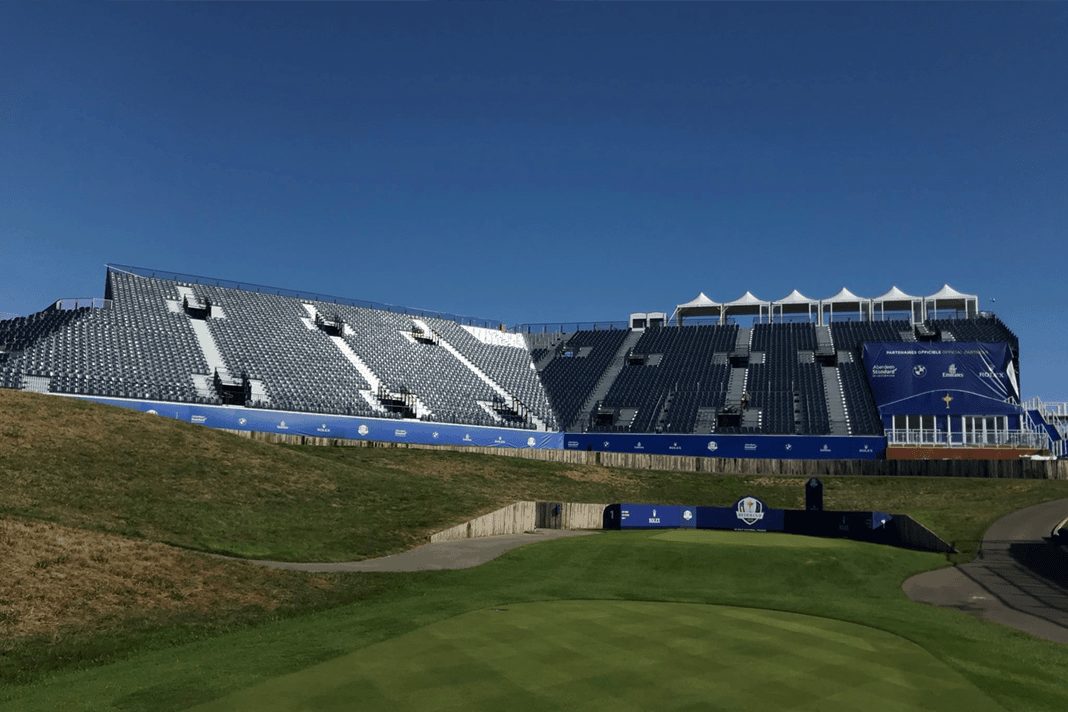 For the latest edition of our weekly podcast, James Dickson, travelled down to the home of Crucial FX’s Origin experience. Here, he spoke to Edward Kitson, match director at the Ryder Cup and David Tunnicliffe, commercial director at GL events UK.

Throughout the podcast, David and Edward explained the working relationship between the two companies and described the process of planning and building the famous golf tournament.

In 2018, the 42nd Ryder Cup was held in France at Le Golf National. Edward described his role as managing the operation and delivery of the matches, whilst David and his team provided and built the temporary structures.

Edward began working with the French golf federation in 2012 to start plans on improving the golf course. This involved new drainage, new irrigation and small “tinkers” to improve the spectator experience.

David explained the long process involved in planning where to place the structures and how best to erect them. Sightlines, structure integrity, safety, camera angles and the players themselves all had to be considered in the design process.

He continued to describe the “spectacular” atmosphere surrounding the first hole and explained a lot of that was product of the horseshoe-style seating around it.

However, the practical side of the structures must be thought about first: can spectators get in and out safely and comfortably? Do disabled people have appropriate access? Will the guests remain warm/cool while in the structures? Only when the logistical challenges were overcome could the “dressings” be considered.

When questioned on how he decides which suppliers to choose, Edward stated that if he is happy with the work and commitment a supplier demonstrates, he will happily work with them again and will be glad to work with GL events UK for the next tournament.

The Ryder Cup will next be in Europe in 2022 for the 44th edition, with Italy hosting it for the first time.

If you would like to feature on one of our weekly podcasts, please get in touch at editor@eventindustrynews.com.