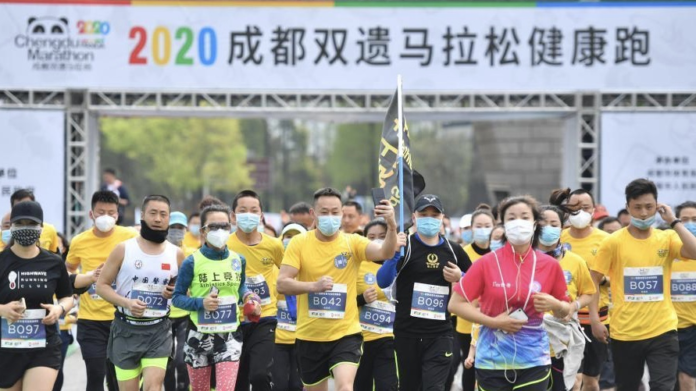 A 6-kilometre mini-marathon was held at a scenic spot in Chengdu, the capital of southwest China’s Sichuan Province, on Sunday morning, marking the first mass running event since the outbreak of coronavirus in the country.

About 1,000 local runners from Dujiangyan District, which has reported zero cases, were seen wearing masks along the route.

All participants and staff members were required to show their health certificates and have their temperatures checked before participating in the race.

To maintain distance between competitors, runners were divided into 10 groups that ran every two minutes.

Despite the area being labelled as “low-risk” for COVID-19, the public still voiced their concern for the runners’ health and questioned the organizers.

“Why can’t you wait for another few months??” @ouhzil echoed.

“As a local in Chengdu, I don’t think it is appropriate,” wrote @zuiaidechengbaola.

However, others supported the move, such as @liangxiang, who wrote: “The marathon has been staged for many years, and I have participated in the race twice. It used to be large, with more than 20,000 runners. This time, competition is obviously not the goal, but a boost of confidence for society.”

As most regions in China are considered low-risk in terms of virus spread, authorities are attempting to fully restore people’s normal lives, and strengthening measures to curb cross-border transmission.