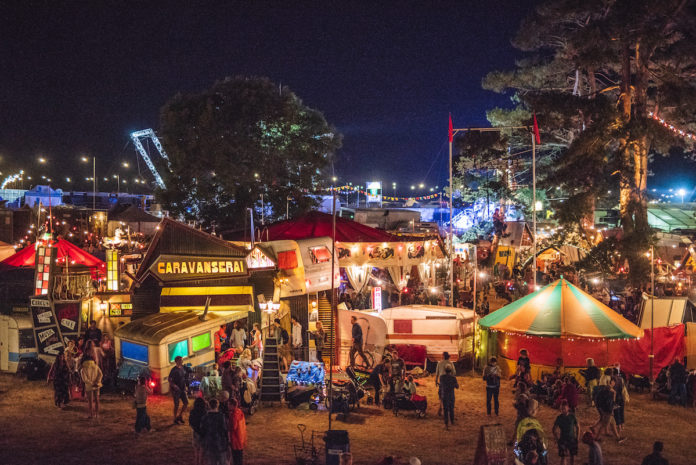 Camp Bestival Shropshire promises to bring all the da Bank family magic up from Dorset, think signature stages and entertainment for all ages – theatre shows, wellbeing workshops, circus spectacles, comedy, kids’ gardens, magic meadows and a maelstrom of music – to another perfect setting.

“It may look slightly crazy [to launch a festival] after what we’ve all been through with Covid, but it’s down to demand,” Rob tells Event Industry News.

The ‘heatmap’ as he puts it highlights people/young families from Birmingham and beyond who have to think twice about making the long journey to Lulworth Castle, Dorset however much they want to get there.

“Weston Park is one of the best sites,” Rob says. “It has the festival heritage but primarily it’s a beautiful place, it’s close to so many conurbations and it’s easy to get to.”

Every PR piece about every new anything trots out the ‘excited’ word at least once but,  promoting Camp Bestival, Rob da Bank is actual exhilaration personified.

Developed with his wife, creative director Josie, it’s a brand their four children have grown/are growing up with and play a pertinent part in, some of the reason, at least, that the Dorset and Shropshire legs won’t run concurrently.

“Having done shows like Common People in Southampton and Oxford over the same weekend it doesn’t add up. We can’t double the creativity to deliver Camp Bestival at two sites simultaneously, we need to give our crew a chance to get from site to site and we want our kids to enjoy it too,” Rob says.

There will be some content crossover though, from kids’ entertainers through to “one possibly two” headliners playing both events.

In terms of putting the shows together, Rob and Josie have managed to maintain their core team and hold on to suppliers across the coronavirus fallow, but there is a commitment to source elements locally too. Methods that have served the organisers well.

“For 14 years we’ve delivered hit show after hit show in Dorset,” Rob says. “Actually, I’m still flummoxed why there aren’t more family festivals out there. It brings a whole different set of pressures of course, but I’m glad we’re in this market and I’m optimistic.“

Camp Bestival Shropshire will be at Weston Park from 18-21 August 2022.

Nic is a senior PR professional, former Editor In Chief, with strong exposure to the live music/events industry with the ability to conceive/deliver very successful campaigns and on-going publicity leading to excellent media coverage.