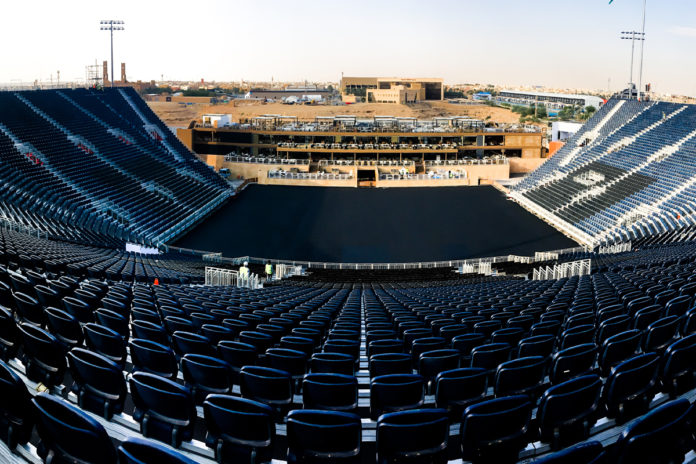 Arena announces that it has completed the design and installation of the 15,000 seat Diriyah Arena and hospitality structure, ahead of the Joshua v Ruiz II boxing “Clash on the Dunes” being held on 7th December 2019.

Commissioned by the Saudi General Sports Authority, the bespoke arena was constructed in just six weeks and is the single largest temporary seating structure that the company has built since the London 2012 Olympics.

Designed with flexibility in mind, the stadium features Arena’s Clearview™ seating system, which is both modular and demountable, designed specifically to maximise audience sightlines, mounted on a substructure provided by partner, PERI Group. The arena will be reconfigured a number of times for the various events taking place as part of the month-long Diriyah Season.

As well as the main event area, Arena has designed and installed a 3,500 square-metre temporary hospitality structure complete with bespoke high specification interiors and furnishings. The luxurious building is designed to provide a premium experience for VIP guests and was constructed using Arena’s proprietary ASD structure, which offers a permanent look and feel.

The highly anticipated boxing match is the first World Heavyweight Title fight in the Middle East, and just one of the multiple iconic events taking place in the purpose-built arena until 21st December 2019.

Over one million people are expected to descend on the UNESCO heritage site, Diriyah, to attend the unmissable set of international sports and entertainment events, including the Diriyah E-Prix, Diriyah Music Festival, and The Diriyah Tennis Cup.

Paul Berger, CEO for Arena Middle East & Asia, said: “It’s incredible what we’ve managed to achieve in just six weeks. We’re really proud of our UK and Middle East divisions, who have spent the last six weeks working with a team of 175 people to deliver a project of such scale and specification. The solution we have delivered has been described as utterly breath taking.

“We are one of the few companies that can offer a full turnkey solution for events of this size, from design and construction through to the luxurious high quality interiors and we are honoured to be involved in a part of history for the Diriyah season and this exciting series of mega events.”

Abdulaziz Baeshen, director of the Diriyah Season, said “A stunning setting requires a stunning stadium and Arena have delivered just that. The eyes of the world will be on the Clash of the Dunes, and we’ve been hugely impressed by Arena throughout the planning and execution of this project.”