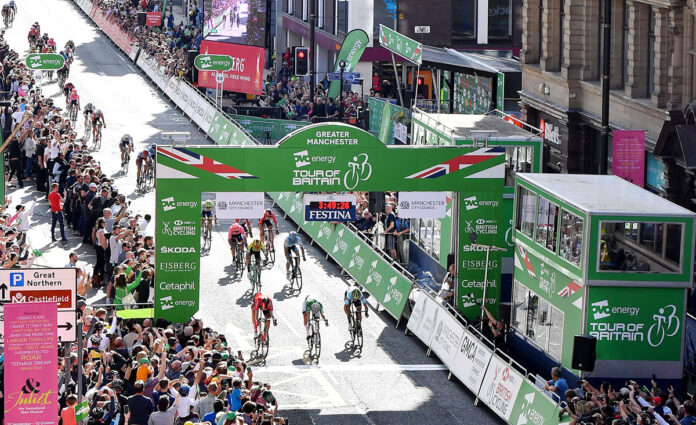 The Tour of Britain will return to Greater Manchester next September as the city hosts the grand depart of the UK’s biggest professional cycle race on Sunday 3 September.

Councillor John Hacking, Manchester City Council’s Executive Member for Skills, Employment and Leisure, said: “Manchester is the home of British Cycling and our velodrome is internationally renowned as a gold medal factory. We hosted the final stage of the Tour of Britain back in 2019 and it’s great to welcome the event once again. Hosting the Grand Depart of the Tour of Britain 2023 is a real honour for us and celebrates Manchester as a premier cycling city.

“This year alone we have made significant investment into cycling facilities across the city, from the major refurbishment of the National Cycling Centre in east Manchester to the new Cycling Hub in Wythenshawe Park, we are committed to encouraging our residents to jump on their bikes.

“Active travel is a key element of our commitment to become a zero carbon city by 2038, and it’s events like the Tour of Britain that create a genuine buzz about cycling and inspire people to get their bike out and reconsider the car as their mode of transport.”

Mick Bennett, Tour of Britain race director, added: “It’s great to return to Manchester following the huge successes of the race’s last visit there in 2019 and, of course, this year’s Tour Series Grand Final in the heart of the city. Manchester is both synonymous with British Cycling and the way it is leading the charge towards active transportation so we can’t wait to get the 2023 Tour of Britain underway in the city.”

Building on the success of Aberdeen hosting the grand depart of the 2022 Tour of Britain, featuring evening events and a cycling festival, race organisers SweetSpot will organise a weekend of cycling events and activities in and around the city, building up to the start of the race in central Manchester.

The announcement follows the news that the final stage of the 2023 Tour will take place in Wales, on Sunday 10 September, as part of a long-term agreement between the Welsh Government and race organisers SweetSpot.

Jonathan Day, Acting Cycling Delivery Director at British Cycling, said: “The Tour of Britain has long been a highlight of the cycling calendar and it is always a privilege to welcome it to Greater Manchester.

“With Manchester also being the home of British Cycling, it will provide a great opportunity for many of our Great Britain Cycling Team riders to showcase this fantastic sport to even more people, giving them the chance to see some of the world’s best riders on their doorstep. With activities taking place across the weekend, it’s the perfect opportunity to inspire more people to get on a bike and give cycling a go.”

Further details of the Tour of Britain 2023 will be announced in the new year, including details of further host venues for the race, ahead of the route launch in the spring.

Opportunities for brands to be involved with the Tour of Britain 2023 are now available, ranging from title sponsorship of the race to jersey partnerships as well as a range of official supplier opportunities. More information can be found here.

Networking at the heart of your exhibition