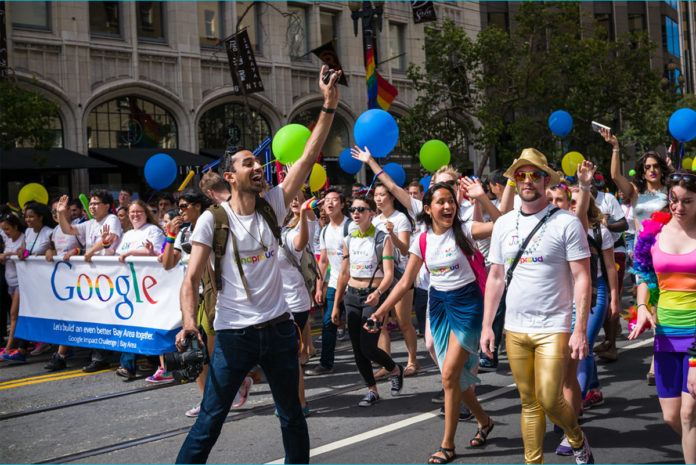 Google has been shown the door as San Francisco Pride members have voted to ban the tech giant from sponsoring and participating in the event.

The vote, which also includes banning Google’s platforms, YouTube and Alphabet, as well as the Alameda County Sheriff’s Office, was cast at the organisation’s monthly membership meeting on Wednesday night. It now rests with the organisation’s board of directors who are “consulting the organisation’s legal team on the potential impact of this recommendation,” Fred Lopez, interim executive director of SF Pride, revealed.

Why has Google outstayed its welcome?

“Since YouTube’s decision in May 2019 to continue to give a platform to homophobia, racism, harassment, we have been asking the board of SF Pride to take action to remove YouTube and Google as sponsors and participants in the Pride parade and festival,” said Laurence Berland and Tyler Breisacher, two leaders of the movement.

The non-profit organisation currently has 326 members who are vetted through an application process and who agree to pay an annual fee. This grants them powers over the nomination of Grand Marshals, the theme of the parades and who represents the board.

The board is being urged to decide on the motion at the upcoming meeting on 5th February.

Breisacher is a former employee of Google and has said that he left the company due to frustrations of its sponsorship of the Conservative Political Action Conference.

Last year, LGBTQ+ employees within Google petitioned SF Pride to remove the company from the official celebrations. Their statement said: “We, the undersigned employees of Google (and related companies, YouTube and Alphabet), urge you to revoke Google’s sponsorship of Pride 2019 and exclude Google from representation in the San Francisco Pride Parade.”

The statement went on to explain that the action came after “serious consideration of the alternatives” and that they had spent “countless hours” advocating for the company to improve its policies on LBGTQ+ matters.

It continued: “Despite the risks, we are compelled to speak.”

The annual event costs over three million dollars to produce and has over 500 volunteers that are provided by more than 60 Bay Area non-profit organisations.

Other sponsors include Facebook, T-Mobile, Smirnoff and Bud Light.