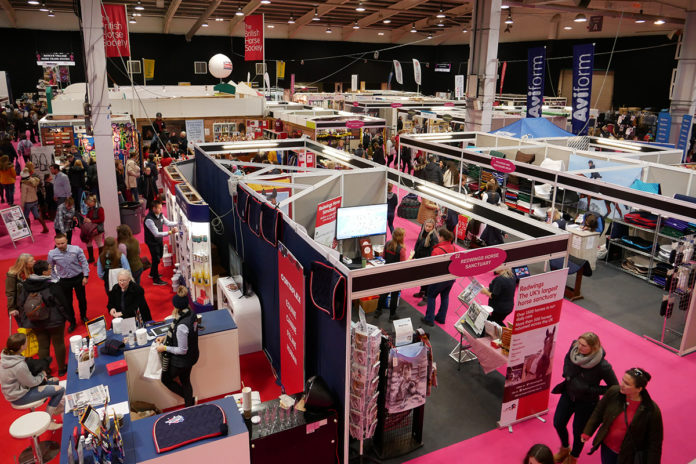 Having saddled up for another edition of Your Horse Live, organisers of the 12-year-old show returned to NAEC Stoneleigh to host the 2019 edition.

The annual show is hosted over three days on the second weekend of November. This year, it took advantage of over 26,000m2 of event space at NAEC Stoneleigh including Hall 1, Hall 2, Hall 3 and The Blackdown Halls along with a purpose-built marquee that Your Horse Live brings on site to increase the indoor floor space.

Originally called The British Equine Event, Bauer Media bought the show to create Your Horse Live from its monthly publication, Your Horse Magazine. It welcomes over 26,000 visitors and comprises a of live horse show with two arenas, exhibition stands, food stalls, stage and live feature areas.

“We’ve had to put our wet-weather contingency plans into place,” Emma started, referring to the flooding that has affected the Midlands over the past weeks. “We started out with two car parks but then had to close one off to vehicles smaller than a 4×4. Then we went down to half a car park before having to close both off and direct vehicles onto the Stoneleigh park site itself.”

Caz stated: “Though the weather has been a challenge, the venue’s traffic management team has been fantastic. They’ve utilised every bit of hardstanding ground that they can.”

Your Horse Live includes horse demonstrations from top riders from around the world. Incorporating live animals into an event production brings with it an element of unpredictability: lighting, sound and props have to be considered to ensure the horses are not spooked.

Speaking on the lighting production, Emma said: “A few years ago, we tried changing the ambience of the show to make it more enjoyable. We have tried spotlights and now we have ‘spot prizes’ in the arena where numerous spotlights roam around the audience until one picks on one person and they win a prize and, of course, the lights went red during the two-minute silence.”

To ensure the horses remain calm, Emma and Caz make sure the riders know exactly what lights and sounds to expect: “If we think the horses won’t appreciate a certain noise or the background music, it doesn’t happen. If a horse begins to get a little spooked, we have a commentator that asks the crowd to keep the noise down,” Emma said.

Caz added: “The nature of the show means that the visitors understand that. We also ensure that the horses have some time at lunchtime to rest and have a break.”

NAEC Stoneleigh is home to multiple events throughout the year including Race Retro 2020 – the international historic motorsport show – and The World of Park & Leisure Homes Show. It comprises three large halls, seminar rooms, conference suites and 800 acres of flexible outdoor space, as well as free parking for up to 19,000 vehicles.

At Your Horse Live, the space outside Hall 3 was used to host multiple food vendors and picnic benches.