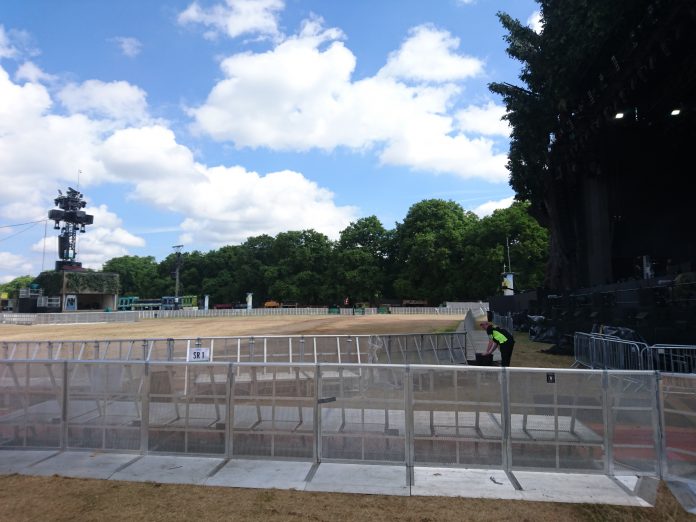 Wight Fencing stretches much further than its original 2008 precept, which was to provide barriers to the burgeoning Isle of Wight Festival (IWF).

Launched by IWF management to provide for the event’s unique, offshore requirements, and buoyed by its success there, Wight Fencing has gone on to provide for some of the biggest events on the mainland. Among them, Reading Festival, Leeds Festival, Victorious and Barclaycard presents British Summer Time Hyde Park (BST), which the company has supplied all the stage barriers to since 2013.

With a tap into partner EPS’ considerable resources, alongside significant investment in its own, Wight Fencing provides, and manages, 1,300m of barriers to British Summer Time, little short of a mile. There’s an amazing amount of barrier ‘specials’ in Hyde Park too, with 1.2m gates, sight kills serving counter and security step extensions in the mix, and a whole lot of variable corners, fixed angles and cable access pieces.

“AEG Live has put a fantastic team of suppliers and individuals together,” Anthony Burke, Wight Fencing’s Managing Director, says.  “It’s the hardest job we do but it’s a real pleasure to be involved with such a venturesome, shape-shifting project.”

In step with the festival’s lauded ‘answer is yes’ approach to show design and production, barrier configurations at BST change every night. Wight Fencing’s three teams, and local crew as required work literally around the clock to fit all the occasions.

In fact, the only barriers in front of the Great Oak Stage that stay in situ for the duration of British Summer Time Hyde Park are around the delays.

“Justin Bieber came with a big B stage, so that was the major changeover this year, and the Home Run Derby, which was incredible to see in that context, required a completely different configuration to any other event at the site,” Burke says. “On top of that we accommodate stage thrusts and the different audience splits according to the VIP specification of each particular headliner, so it really is non-stop.”