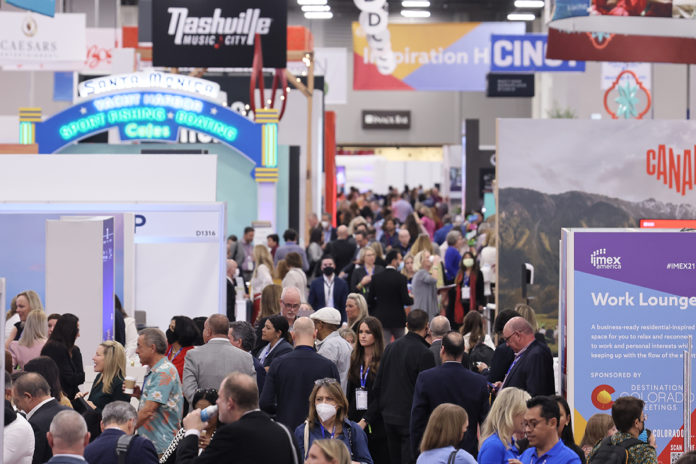 It was a triumphant return to Las Vegas for the business events industry at IMEX America. The show, which took place 9 – 11 November in Las Vegas, saw 8,600 industry professionals from 80 countries meet to network and kickstart business regeneration, conducting 50,000 business appointments, two-thirds of which were to discuss a specific meeting or event.

The favourable ratio of buyers (3,420) to exhibitors (2,200 exhibiting companies) added to the business momentum as did the positive, upbeat atmosphere, with the show being described as ‘the Olympics of events’.

Post event analysis reflects the resounding response of the industry to the return of IMEX America. KPIs increased from 2019 and satisfaction scores placed the show ahead of the industry benchmark and in the top 1% of trade shows surveyed by attendee research company Explori.

The show has generated positive ripple effects across the industry with the survey showing that over three quarters of respondents have done, or plan to do, business with new and current suppliers as a result of attending IMEX America – with 91% of buyers and 98% exhibitors rating the show as important to their business. One buyer explained: ‘we’ve attended each year of IMEX and this year I felt the ratio of buyers to suppliers was really strong – the best IMEX ever!’

Further statistics for the 10th edition of IMEX America can be found here, including buyers by nature of business, buying power and country.

The show’s success has generated positive momentum and confidence ahead of IMEX in Frankfurt 2022. The milestone 20th anniversary of the show takes place 26 – 28 April and global exhibitors from Spain to Seoul, Germany to Latvia and Egypt to Ras Al Khaimah are already confirmed; alongside all the major hotel groups who will be bringing their clients to the show as hosted buyers.

Carina Bauer, CEO of the IMEX Group, comments: “Feedback shows that the thousands of appointments at IMEX America produced strong business for a wide cross-section of our exhibitors. Also notable was the quality of business and RFPs coming from walk-up appointments by attendee buyers. This is a clear signal that the industry is starting to build back confidently.

“We saw that business pipelines are starting to fill up, not just regionally and nationally in the US but globally, and we heard plenty of reliable feedback about strong 2022 order books. Evidence of this is in the uptake we’re seeing from international suppliers joining us at IMEX in Frankfurt next April. We’re confident that this early demand paves the way for a successful 20th anniversary of our Frankfurt show and, most importantly, that this renaissance is global by nature.”