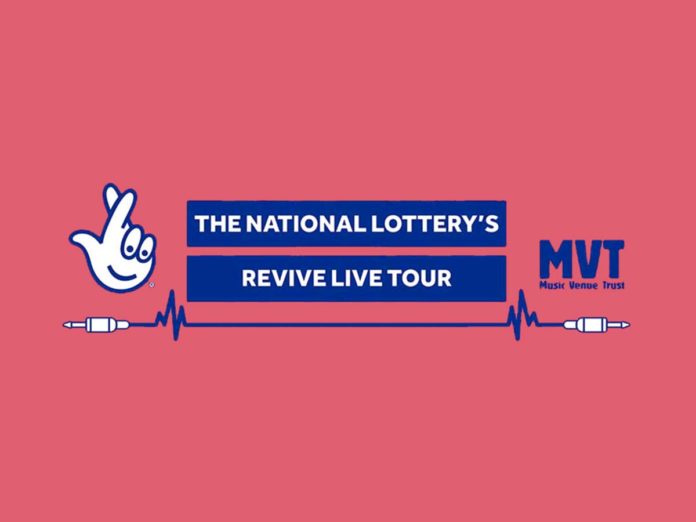 Music Venue Trust (MVT), which represents hundreds of grassroots music venues, has announced The National Lottery’s Revive Live Tour will return in January 2022.  A new round of live shows will take place across the UK in the new year, following the overwhelming success of the tour during the summer.

Launched in July 2021, the initiative saw Music Venue Trust team up with The National Lottery to help revive the UK’s grassroots live music sector.  The National Lottery contributed £1M to directly underwrite the touring and production costs of hundreds of live performances, enabling the grassroots live music industry to start promoting shows again in the knowledge that the upfront costs associated with touring were fully covered.

This ground-breaking partnership resulted in 278 live shows played in front of more than 74,000 music fans and over 37,000 tickets given away to National Lottery players who were able to bring a plus one for free.

The National Lottery’s Revive Live Tour supported 138 grassroots music venues throughout England, Scotland and Wales, with the average capacity of each venue being 267 and 122 acts in total taking part.

The initiative also provided employment opportunities not just to the venue owners and artists but across the live music sector.

The National Lottery will once again underwrite the full touring and production costs of artists participating as part of their ongoing commitment to the grassroots music sector.

Full details of all artists participating, dates of individual performances and the venues hosting shows will be announced in the near future.

Mark Dayvd, CEO of Music Venue Trust said, “The overwhelming success of The National Lottery’s Revive Live Tour in the summer meant that it wasn’t a difficult decision to push forward with another set of shows in partnership with our friends at The National Lottery. By choosing January, a traditionally quiet time of year for live music, to launch a second phase of the tour, we hope to start the new year with a bang and to create some positive momentum in 2022 for the grassroots music sector.”

Nigel Railton, Chief Executive of National Lottery operator Camelot, said, “The National Lottery is delighted to be able to work with Music Venue Trust again as we head into 2022.  Despite challenging times, The National Lottery’s Revive Live Tour in the summer was a huge success and saw over 37,000 tickets gifted back to National Lottery players as a thank you for the amazing things they make happen by buying a ticket.  A new round of live shows will hopefully bring friends back together in the new year and continue the much needed support for the grassroots music sector.”

This support for the live music sector forms part of a continuing collaboration between VisitBritain and The National Lottery to support the UK Visitor economy.