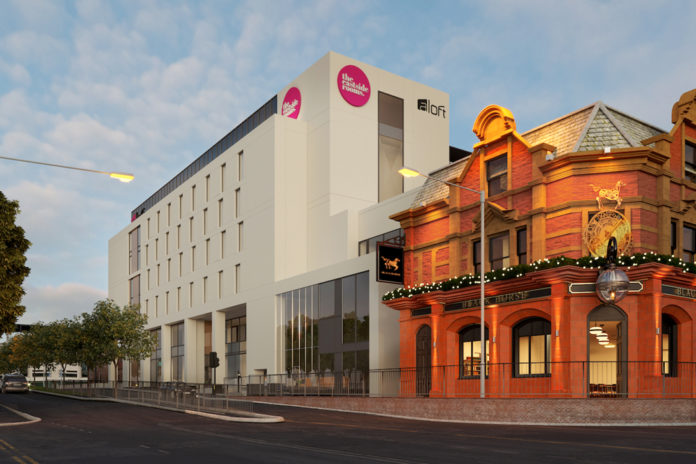 the eastside rooms is sharing details of its new state-of-the-art conference and events venue with UK buyers, for the very first time this week. The venue, which will open its doors in spring 2020, is now taking bookings for meetings and events, and will be showcasing what is set to become one of the most exciting event spaces in Birmingham.

The new centre, which will feature both an on-site hotel and an on-site pub, linked directly into the meetings and events business, is being built as part of the ‘Eastside’ development of the city and will sit in the heart of what is being called the ‘Knowledge Quarter’. The new district sits alongside the city’s universities, and will also house science, research and educational facilities, all being built as part of a city-wide strategy, focusing on the knowledge economy.

The Eastside is also located within walking distance of Birmingham City Centre, the city’s beautiful canal network, and also the ‘historic Birmingham’ area, made famous by the TV series Peaky Blinders. The venue will be within walking distance of Birmingham’s two main train stations, therefore linking it effortlessly to its national and international airports. Because of this, owners are already calling it ‘the most connected conference centre in the UK’.

At the heart of the eastside rooms will be the venue’s main space, the Affinity Suite, the city’s largest pillar free banqueting space, capable of seating 1,200 delegates, surrounded by over 800 sqm of plenary, breakout, meetings, and events space. The space itself will have its own welcome reception, state of the art AV and technical capabilities, as well as a roof to ceiling divider wall which can slice the room in two.

Outside of the Affinity Suite there is breakout capacity capable of housing the 1,200 delegates that can fit into the main space.

The first of which is the Belmont Suite, itself capable of hosting up to 400 delegates, and with similar roof to floor dividers that can turn it into four separate rooms. The Belmont Suite also sits within a larger atrium, which floods the space with natural light and makes for an easy business networking and relaxation area.

The eastside rooms also has a number of smaller meetings and events spaces, hosted on floors one and two of the venue, all with their own dedicated reception and F&B servicing areas. The meeting rooms follow the same contemporary design, hi-production AV and technical support as the other spaces, and with large display windows that allow natural light and a view of the Knowledge Quarter that surrounds the venue.

Finally, the eastside rooms has on-site a 195-room Aloft Hotel, with its own dedicated entrance, and a mixture of standard to luxury suite accommodation options. There is also an on-site pub, which has been preserved from one of the city’s oldest public houses, and carefully restored as part of the eastside rooms development. The pub creates a seamless mixture of contemporary and historic atmospheres within the venue and offers a different setting for more informal events.

“The eastside rooms couldn’t be coming to Birmingham at a better time, there is so much momentum in the city right now, and so much going on with the creation of the Knowledge Quarter and the increase in transport links,”comments Matt Huddart, Regional General Manager, the eastside rooms. “We think our mixture of state-of-the-art meetings and events space, light and spacious breakout space and the hotel and pub, all makes us a really interesting place to host memorable meetings and events.”

“This part of Birmingham has an amazing heritage that will be woven into the design of the hotel, but it also has a great future, that we’re delighted to be a part of,” concludes Matt.

The eastside rooms will open in spring 2020, however the space itself will be presented to meetings and events planners in the autumn this year.