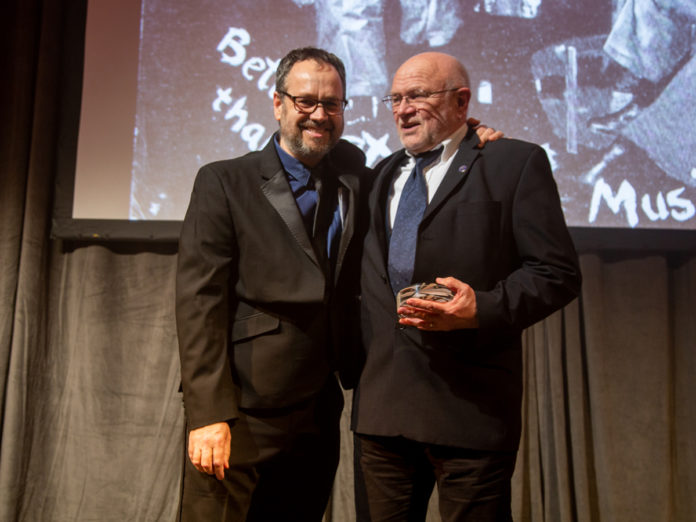 Steve Heap, General Secretary of The Association of Festival Organisers, has received the Industry Legend Award at the 2022 Event Production Awards. The awards ceremony took place on Thursday 17 February at Novotel London West, with Andy Lenthall, CEO Festival Insights Ltd, presenting the Industry Legend Award to a surprised Steve Heap on the night.

Unlike the other award categories for the EPAs, the Industry Legend Award isn’t open for nominations, with the winner instead decided by the Editor of Access All Areas.

The Industry Legend Award is designed to “…recognise outstanding achievements within and contributions to the outdoor events industry over a career. The recipient is someone who has pioneered, innovated and driven change in the industry.”

Steve Heap has been the AFO General Secretary since its formation in 1987.  With over 55 years of experience in the festival and events industry, Steve is also the Director of Mrs Casey Music, Chairman of the Events Industry Form (EIF) and a contributor to The Purple Guide dealing with health, safety and welfare at music and other live events. He was also the Director of Towersey Festival for 45 years until August 2019.

Steve founded Mrs Casey Music (MCM) in 1972, initially as an artist agency before developing into a festival promoter and three years later, taking over the running of the Towersey Festival.

In the decades since, MCM has promoted music events, worked on community arts festivals, including, from 1986 to 2004, the Sdmouth International Festival in Devon. MCM was also involved in the BBC Radio 2 Young Folk Award from 2008 to 2011, has promoted concerts at the Royal Albert Hall and grown its own MCR record label.