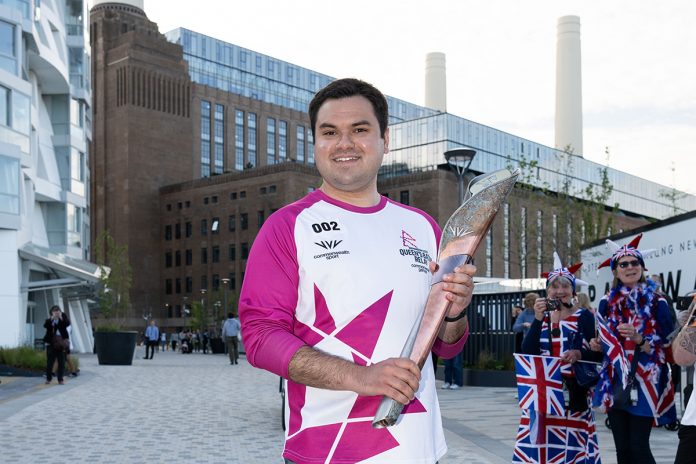 Sports Technology (ST), Official Provider of Large Video Screens and Audio Services for the Birmingham 2022 Commonwealth Games, are delighted to take part in the Birmingham 2022 Queen’s Baton Relay which started on Thursday 2nd June in London to celebrate the Platinum Jubilee weekend. The Queen’s Baton Relay is one of the most exciting traditions of the Commonwealth Games, visiting 72 nations before the sporting event begins.

Thomas Matthews, Helen Jeffrey, Dallas McIntosh, and Daniel Rosenberg will be official Batonbearers, taking part in this momentous event. Each representative was selected for this once-in-a -lifetime opportunity, for their contribution to charities, communities, and other inspiring work.

There will be thousands of Batonbearers in England, with the domestic relay including a four-day visit to London across the Jubilee weekend from 2-5 June and later returns to England on 4-28 July 2022. Batonbearers for the Queen’s Baton Relay in Scotland, Northern Ireland and Wales will be selected using criteria set by Commonwealth Games Associations in each country.

The Queen’s Baton Relay criteria for choosing official Batonbearers looked for people who are willing to take on a challenge and have their own unique and inspiring story. These included making a meaningful contribution to sport, education, the arts, culture, or charity, being a figure of inspiration that positively challenges others to achieve their best or have taken on a challenge or cause and made a positive impact within their community.

Starting Thursday 2 June, the Baton has spent four days in London, coinciding with the Queen’s Platinum Jubilee Weekend, celebrating The Queen’s 70th year as Monarch and Head of the Commonwealth, before continuing its international journey.

The Baton returns to England and starts its journey at the Eden Project in Cornwall on the 4 July, travels the length and breadth of the country, then finishes in Birmingham on 28 July, the day of the Opening Ceremony for Birmingham 2022.

Thomas Matthews, Multi-skilled Operator, was an official Batonbearer at the iconic Battersea Power Station, London, which took place on Thursday 2nd June at 6-8pm to mark the Queen’s Jubilee. Thomas says, “Despite being autistic, I hope I can be a role model to prove that nothing is impossible. My love of running has come into my workplace. Before the pandemic I started a work running club, which started working on the Couch to 5K program. This was beneficial for both everyone’s physical and mental health. I have also been a volunteer for the past few years at my local running club’s Couch to 5K program, which has reached out to many within the local community.  During the pandemic and because of my own struggles with mental health, I set up a 24-hour virtual relay for my local running club, raising £558 for the Mind charity.”

Daniel Rosenberg, Supervisor Rigger Driver, taking part on 5th July,was chosen for his commitments to his local community in Gloucester.  In January he undertook a running challenge with his local Football Club (Barnwood United) raising over £800 for eating disorders charity (by completing 109 miles).  Daniel says, “Being nominated to be a Batonbearer is an honour and something that will stay with me forever. I hope by doing this, it will inspire my kids more to not be afraid to put themselves out there and be more involved with any opportunity that comes their way.”

Dallas McIntosh, Comms Solutions Engineer, will be an official Batonbearer on 7th July. He says, “A year ago today I was in Gatwick Spire Hospital recovering from life changing surgery which had been carried out on me that morning. Then recently, at the test event for the Birmingham 2022 Commonwealth Games at the Sandwell Aquatic Centre near Birmingham, I installed the matrix intercom system I have worked on the design of.  It’s incredible to reflect on how much has happened in the space of a year and the Games have been a huge focus for me in pulling through after several years of ill health.  From a mental health point of view working on the project has been the best thing possible and I couldn’t have been in safer hands than I have been because of the people I work with.”

Helen Jeffrey, Sales Director, was chosen as an official Batonbearer after dedicating her time to raising money for various charities. A Cycle China challenge in 2014 across the mountains of Beijing, Cycle Vietnam to Cambodia in 2016, Coast to Coast Costa Rica in 2019 as well as Ride the Night in 2015 and 2016, Helen has spent her time raising money for 3 Women’s cancer charities: she has raised over £12,000 for Jo’s Cervical Cancer Trust, the Ovarian Cancer Action and Breast Cancer Now.  In Sept 2022, Helen will be cycling across Sri Lanka and in November 2022 through Kerala in India, all for these same charities adding another £4,000 for these charities. Helen will be an official Batonbearer on 26th July in the West Midlands.

Damian Rowe, Managing Director of Sports Technology, comments: “As an ‘Official Provider’ to the Birmingham 2022 Commonwealth Games, we are thrilled that, members of our teams have the opportunity to participate in the Birmingham 2022 Queen’s Baton Relay to celebrate the Queen’s Jubilee year. The Queen’s Baton Relay is an opportunity to recognise and celebrate people who have displayed values which are at the heart of the Birmingham 2022 Commonwealth Games – a dedication to giving back, being the best version of themselves and inspiring others”.

Sports Technology CEO Dave Crump added: “We are delighted to continue to work with the Commonwealth Games, in partnership to offer our people the once-in-a-lifetime opportunity to be part of the Queen’s Jubilee Relay to mark this special Platinum Jubilee occasion. Giving back to those people who have battled personal illnesses, raised money for charities and go over and above to help others, is in the spirit of the Commonwealth Games and valuing our people”.

The Queen’s Baton for the Birmingham 2022 Queen’s Baton Relay champions the individuality in humanity and celebrates bringing people together. The Baton is entwined with unique components and displays connectivity to represent the power of collaboration.

Discover more about the Queen’s Baton Relay by visiting the Birmingham 2022 website.