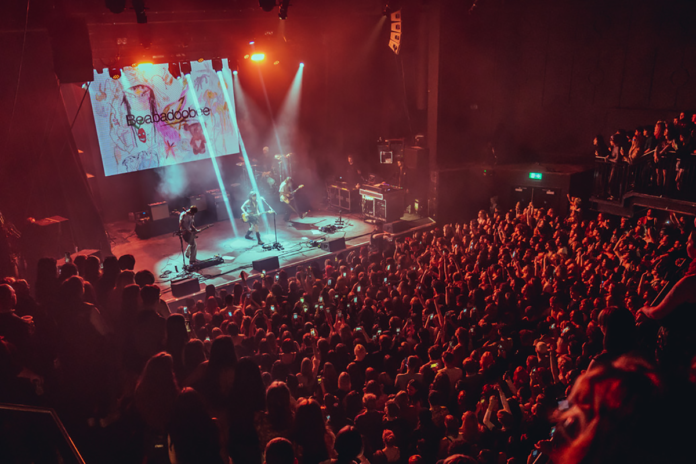 Up the stairs into the main room, via Instagrammable city colours décor and the NX logo, ticketholders are met with a full, unmitigated view of the stage and an unrivalled audio experience.

John Tinline, managing director at Encore Sounds, says: “We spec’d the PA by committee, working with Electric Group and the architect, developing the original want for a ‘facsimile of the system in Electric Brixton’, which works so well, to accommodate the tiers at NX. It’s a great sounding room.”

The 1,550 strong Beabadoobee crowd, predominantly teens/20-somethings, take full advantage of the next generation space. They fill the sprung dancefloor and the tiered galleries/platforms – a product of Electric Group’s initiative to cut the distance between performer and audience – as Beabadoobee, picked out by the Chauvet Maverick lighting rig, plays in front of the cover of her Beatopia album cast across the 7m by 6m video wall behind the band.

The artist experience at NX Newcastle is equally 2020s. Incoming events are guaranteed a clear stage, house equipment packed away in the substantial storage provision, three carpeted dressing rooms downstairs, each with its own bathroom/shower, with a fourth, stage right, there for a quick change or a crew room.

Marc Graham, production manager at NX, comments: “Everything is where you want it to be when you walk off the bus. There’s a dedicated production office with desks, wi-fi, sockets, fridge, coffee machine, and it’s not in the same bank as the dressing rooms so you can have that privacy.

“We’re really proud to be independent and there’s no commissions, no fees, on merch, which is such a vital revenue for bands/players at every level. We provide the tables, the lighting and the boards, they sell, and everything belongs to the artist.”

With upcoming shows including Electric Callboy, James Bay, Holly Humberstone, Dylan and Inhaler, NX Newcastle is the new benchmark for performance and performers.

Nic is a senior PR professional, former Editor In Chief. With strong exposure to the live music/events industry, Nic has the ability to conceive/deliver successful campaigns and on-going publicity leading to excellent media coverage.