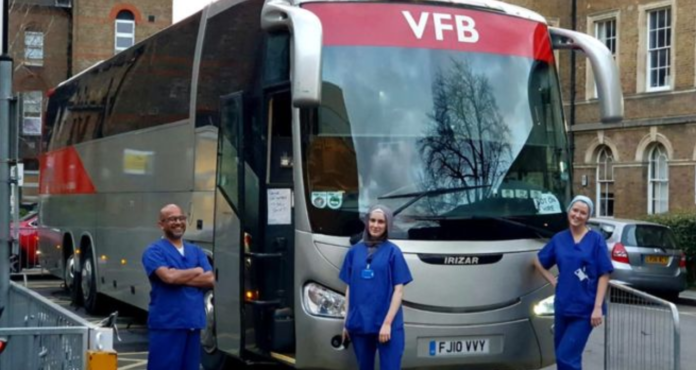 Music fans won’t need reminding there are no live gigs happening at the moment.

As well as empty venues and festival fields, the tour buses that would normally ferry stars around the country are also out of action.

But when Tarrant Anderson found himself armed with a fleet of vacant “hotels-on-wheels” he wanted to “do some good”.

Despite his business being “decimated” by the lockdown he set out to hand them over to the NHS.

Tarrant tells Newsbeat his touring company Vans For Bands was in full swing at the start of March.

“We had between 30 and 40 tours out on the road when the COVID-19 shutdown started to happen across Europe.

“Overnight, as the ban on public events came in, they all shut down.

“All our vehicles came back to the yard and they were doing nothing.”

He says the touring industry is “on its knees” because of the lockdown and that the last month has been “a nightmare of trying to make sure we can survive”.

But during that time, he says it was hard to ignore pictures of exhausted doctors and nurses in the media.

“We had all these buses gathering dust so we got on social media to see what we could do.

“The main thing we got back was that hospitals needed somewhere for staff to rest up, decompress and feel more human.”

After making sure the buses met lockdown guidelines and NHS health and safety standards – the Vans For Bands fleet started heading out to hospitals.

Mick Jennings, a consultant at Lewisham Hospital, has been using the bus parked outside their building.

“You look at the people coming off shifts after about 12 hours, they’re absolutely spent from all the emotion, all the tension,” he tells Newsbeat.

“It’s completely unrecognisable on the ward compared to before the pandemic. It’s unlike anything we’ve ever seen.

“Everyone is working so incredibly hard to help very ill people and it’s not surprising people are anxious about coming to work.”

However, he says walking onto the bus instantly makes staff feel like the big names that would normally use it.

“Every time you sit down it’s like ‘Yeah, this is a special place to be and I’m special, too.'”

Mick admits he’s tried to guess who might have sat in his seat before him but is well aware the buses “have probably seen a lot more action than we’re showing them”.

Aside from dreams of “getting out on the road when this is all over”, Mick explains the gesture represents something bigger which he hopes will come from the pandemic.

“The thing I take away, more than anything, is how much support we’ve had from the community.

“People understand what we’re putting on the line and appreciate it.

“If that’s the main thing that can be the legacy of all of this then that will be a great thing for our society.”

For Tarrant, seeing people like Mick get something out of the buses has been “a ray of light in what have been pretty dark times”.

“Being able to give NHS staff a place to be gives us all reason to get out of bed.”

He says they’ve still got “plenty of buses” ready to ship out to “as many hospitals as possible”.

The company isn’t charging the NHS to use the buses, but keeping them on site 24-7 comes at a price.

To keep the scheme going, Tarrant and his business partner Ed Thomsom have called on some of their previous clients to create a virtual festival, Bus-tival, featuring the likes of Frank Turner, Sundara Karma and Our Girl as well as guest appearances from various NHS staff on the buses around the country.

All proceeds will go towards keeping NHS staff on the frontline rested as well as sending more buses around the UK.