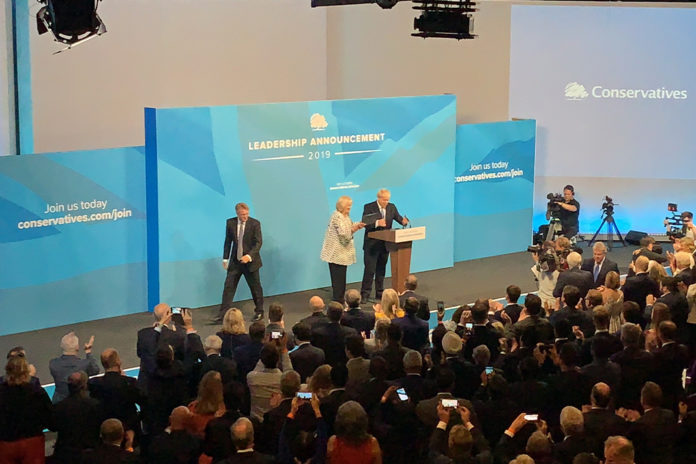 One of Central London’s leading large events venues, the QEII Centre, was once again providing the stage for one of the most anticipated moments in modern British politics as the new Tory leader was announced today (23rd July).

The result of the leadership ballot was announced on stage in QEII’s Churchill event space, where an audience of 500 Conservative Party members and press heard the official announcement that Boris Johnson will become leader of the party. Theresa May will now step down as Prime Minister, and the Queen will be asked to appoint Boris Johnson as Prime Minister on Wednesday 24th July.

Throughout its 32-year history, the QEII Centre has provided a stage for game changers and innovators, welcoming world leaders, heads of state, global icons and some of the greatest minds of the 21st century. The centre’s net economic contribution to the UK economy in 2017/18 was £145m and its GVA to London alone was £110.9m.

With its location in the heart of Westminster, opposite the Houses of Parliament and Westminster Abbey, the QEII Centre and British politics have gone hand-in-hand, with numerous conferences, leadership announcements and major policy decisions being made at the centre.

Chief executive of the QEII Centre, Mark Taylor, said: “QEII has been the setting for many political and significant announcements. QEII not only offers an unbeatable location, but also has the gravitas needed for events of this significance, along with the capacity, facilities and security required.