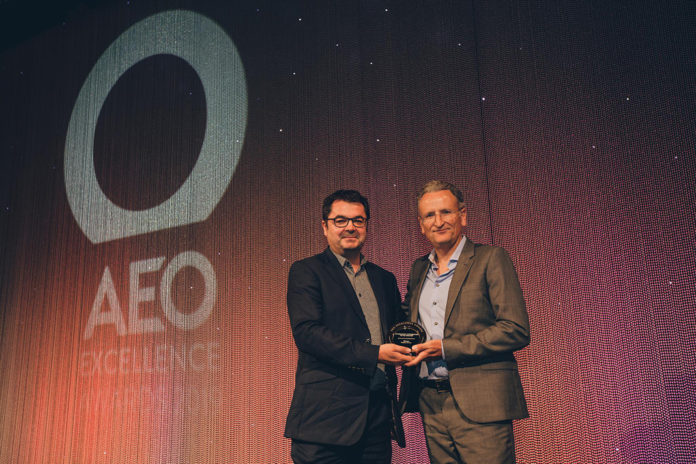 After more than 30 years with Mack Brooks Exhibitions, Stephen Brooks has received the highest honour at an industry awards event.

He’s been awarded Outstanding Contribution to the Industry Award from the annual Association of Event Organisers (AEO) Excellence Awards. This award is highly coveted and is reserved for those who have made a major positive difference in the international events organisation sector through their career.

Stephen Brooks, an industry stalwart, with more than 33 years’ expertise in the field, was selected by the AEO for his lifetime achievements within the events industry. Members commented on his pioneering of geo-cloning, support to the industry and association, and huge success as an independently owned, global exhibition business.

“I’m delighted to receive this award after such a long and rewarding career in the industry. I’m immensely proud of Mack Brooks Exhibitions, and the achievements of everyone who has worked and contributed to its success.”

“I’ve learned a lot from everyone I’ve worked with in the events industry since I began, and I’m still learning every day.” says Stephen. “Many of the most important business lessons I’ve learned are through working with great customers, colleagues and industry peers.It’s an honour to receive this award from the AEO,” says Stephen, who has been with Mack Brooks since 1978.

Stephen has twice chaired the AEO and continues to chair the international group. This year’s AEO awardswere held at Grosvenor House in June and celebrate the great and the good of the events industry. Hosted by comedian Katherine Ryan, awards were given in categories ranging from Best Use of Technology to Best Marketing Campaign of the Year.