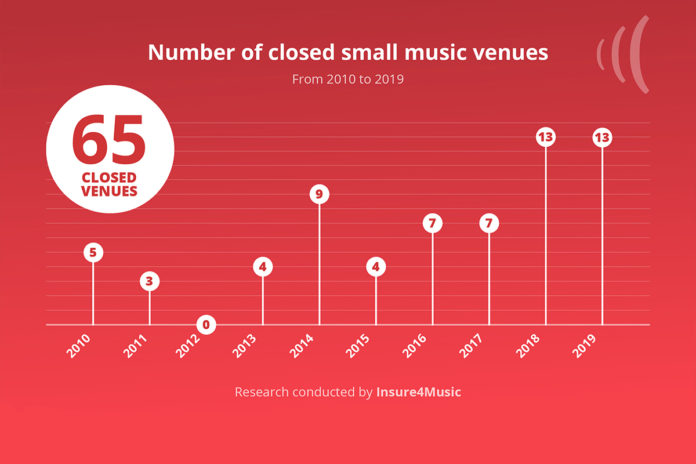 That’s according to an interactive map from Insure4Music, which illustrates the UK’s open and closed small music venues.

The map reveals that 20% of the UK’s small music venues have closed in the last 15 years, with 54 closing since 2014 and 26 venues closing in the last two years.

This is despite extensive lobbying from various politicians and organisations to safeguard the UK’s grassroots music scene.

Labour MP John Spellar is among those who’ve campaigned for the preservation of grassroots venues. Mr Spellar’s ‘Agent of Change’ Bill to save live venues from closure went to Parliament and gained public backing from Paul McCartney and Billy Bragg among others.

The Government subsequently introduced changes to planning guidance which incorporated the proposals in Mr Spellar’s Bill. However, it appears that more measures still need to be taken to slow the rate at which small music venues are closing.

Mr Spellar said: “While the change in planning regulations has provided some welcome protection, it’s clear that more needs to be done by the Department for Digital, Culture, Media & Sport and by local government to protect and encourage small music venues. They all need to remember that no star started out by headlining at Wembley Stadium.”

Some of the iconic small music venues which we’ve lost over the years include Madame Jojo’s in Soho, The Boardwalk in Sheffield and The Arches in Glasgow to name just three.

This year alone, 13 small music venues have closed, including The Harley in Sheffield, The Maze in Nottingham and Gwdihŵ in Cardiff. A number of other venues are also under threat of closure, such as The Flapper in Birmingham.

A large majority have closed due to rent increases, with the Government excluding music venues from a cut in business rates being offered to small businesses at the start of this year.

Commenting on Insure4Music’s findings, Claire Mera-Nelson, director of music at Arts Council England said: “Live music venues are an important part of the ecology for developing talent and sustaining the success of the UK’s music industry. But, as we know, grassroots music venues are still facing growing financial and operational pressures.

“Over the years, the Arts Council has supported large and small music venues across England through our National Portfolio and National Lottery Project Grants, both directly and through our support of Independent Venue Week and the Music Venue Trust. And we recently launched Supporting Grassroots Live Music, a new £1.5m fund to support the people who host and promote live music in diversifying their offer and attracting new audiences.”  This article follows another piece from Event Industry News that found that small venues were struggling to survive amid rising costs and building developments.