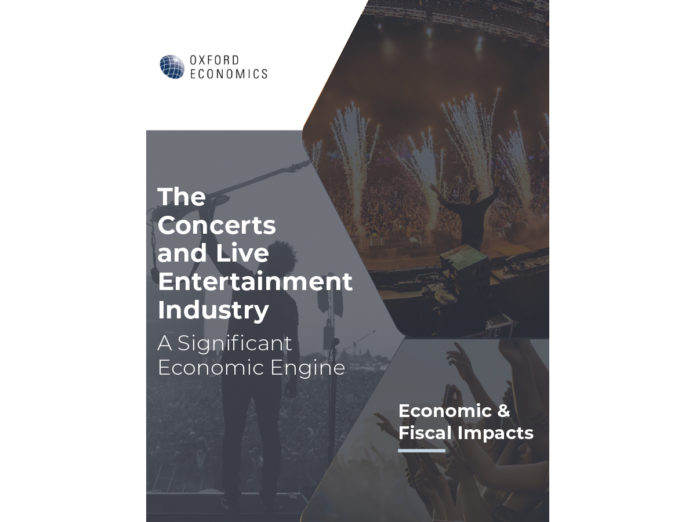 Today Oxford Economics released an economic report entitled “The Concerts and Live Entertainment Industry: A Significant Economic Engine,” that highlights the industry’s contributions to the U.S. economy. The report, commissioned by Live Nation Entertainment, was conducted by Oxford Economics to better understand this important industry’s contributions to the U.S. economy nationally and at the state and local levels.

“Beyond its important cultural contributions, the concert and live entertainment industry generates massive economic upside, supporting the livelihoods of nearly a million people in the US and sustaining public services with nearly $18 billion in taxes generated in 2019,” said Adam Sacks, President of Tourism Economics, an Oxford Economics company. “The US needs a flourishing concert and live entertainment industry to achieve full economic recovery.”

The report’s key findings revealed that:

While the national impact of the live event industry is significant, live’s impact starts locally. Concerts and live entertainment events generate significant economic impacts at the state and local level as its venues spend money in local economies to sustain daily operations, including spending on payroll, marketing costs, legal services, and professional services. And, the economic impact of live events extends beyond the jobs, event, and venue itself to local restaurants, hotels, bars, retailers, and small businesses. For example, If an out-of-town attendee were to spend $100.00 on a concert ticket, the local economy would benefit from an additional $334.92 in spending, resulting in a total spending impact of $434.92.

Live events also contribute to the overall quality of life in a region that helps to attract and retain businesses and talent and helps to create the sense of community so many crave after this year of isolation caused by COVID-19. Beyond the cultural loss involved, the US economy has incurred massive losses in GDP, employment, household income, and tax revenue due to the shutdown of live events during the pandemic. Due to this, the report examined 2019 data to ensure a complete analysis could be conducted that is in line with regular performance of the industry.

As local government officials are providing approved health and safety guidelines, concerts, festivals, and live events are beginning to return to communities around the country. After a year of isolation, many crave getting back to enjoying memorable live experiences safely in 2021 and into the 2022 and 2023 seasons. This renewed enthusiasm for live positions the industry for growth in the coming years as long as safety measures and vaccinations continue across the country.

The Concerts and Live Entertainment Industry, as defined by this report, includes all live musical performances, such as festivals and concerts, and comedy shows held in amphitheaters, clubs, theaters, arenas, stadiums, and other venues. Not included in this analysis are theater, Broadway, sporting events, and family shows.