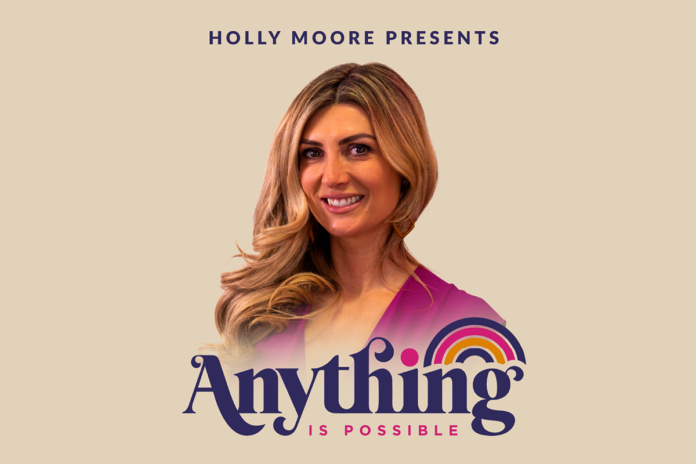 Holly Moore, CEO of the female founded, Manchester based full service events agency, Make Events, is set to launch a brand new podcast with an impressive lineup of familiar faces this August.

The Anything is Possible podcast will feature guests including Jacqueline Gold, Executive Chair of Ann Summers; Fred Done, founder of Betfred; The Founders of Barry’s Bootcamp UK; Joan MacDonald of ’Train with Joan’ and Madeleine St Clair, Digital Director at Benchmark Drinks and Managing Director at Wines Delivered, with more inspiring guests to be revealed throughout the year.

The mantra, Anything is Possible, is the inspiration behind the name of Holly Moore’s brand new podcast, and one that helped Holly to build her business into a global success. After recovering from a 5 year battle with OCD – a battle she was told she would never recover from – Holly’s mantra became Anything is Possible. Now she aims to empower, motivate and inspire people of all backgrounds and ages that anything truly is possible.

Having this mindset helped Holly guide the business through the pandemic, with Make Events not only surviving one of the most challenging times to face the event industry but doubling in size.

The podcast will delve into the fascinating stories of the well known and much loved figures who embody the mantra, as well as brands and people that have inspired Holly on her journey.

The Anything is Possible podcast will show that there are no barriers to success, no matter what age you are. It is a must-listen for anyone on a journey who needs to be reminded of why they started; for any budding entrepreneurs who might need that final push to believe in themselves and make the leap; or indeed anyone interested in motivational stories from some of the world’s most inspirational figures. Just some of the guests include Fred Done who built a multi-million pound betting business from a calculated wager on England to win the 1966 World Cup; Jacqueline Gold whose mission is to to inspire women in the boardroom as well as the bedroom and the founders of Barry’s Bootcamp UK on what success means to them.

Commenting on the launch of the podcast, Holly Moore said “This podcast has long been a dream of mine and something that motivated me to continue throughout the pandemic.  I am excited to finally share this special project with listeners in the UK and, hopefully, across the world.”

“The mantra, Anything is Possible, is what inspired me to set up Make Events and it has stuck with me ever since, even when life threw challenges my way, such as the pandemic and even struggles with my mental health, the mantra helped me to carry on persevering and thriving for success. I hope to, in turn, inspire all generations that there are no barriers to success, whatever success means to them, at any age, that anything truly is possible.”

“We have an incredible lineup of guests for the podcast’s first season including some that have had a massive impact on me personally and have been with me since the early days of Make Events. We have guests to announce later in the season, all with inspiring stories to tell of their route to the top, both personally and professionally.”

“Anything is Possible is the start of more fantastic projects to come, with more huge plans to announce this year.”

The inaugural Anything is Possible Conference is also launching with the first event confirmed as March 25th, 2023 in Victoria Warehouse Manchester. The Anything is Possible conference is aimed at anybody looking for possibility and hope, and the opportunity for a second chance. Moore has travelled the world attending the most revered personal development conferences including the Girlboss rally and Oprah Winfrey’s wellness conferences, and this, coupled with her extensive experiences running some of the world’s most spectacular events promises a day to remember and, most importantly, inspire. Whether in one’s business or personal life, Holly and a host of inspirational key-note speakers will empower people with the thought that Anything really is Possible and that success can come at any age in many shapes and forms. Tickets will be available mid October.