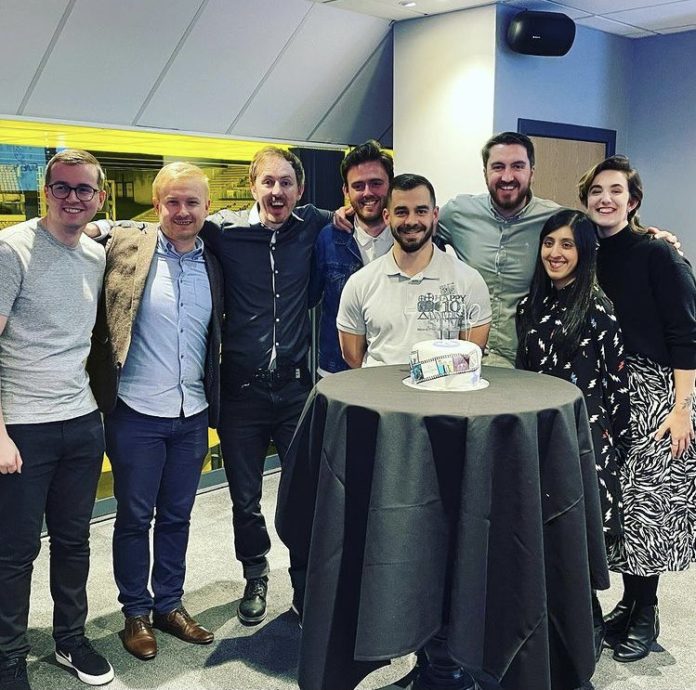 Leading video, animation and livestreaming agency Stone’s Throw Media has celebrated its 10th anniversary after a year of continued growth.

The Wolverhampton-based digital agency, whose clients include leading brands such as Redrow, JLR, Greene King and Wolverhampton Wanderers, marked its first 10 years in business with a party for clients, partners and staff at the Molineux Stadium on Friday night.

Representatives of Briggs Equipment, Redrow and Wolverhampton Wanderers were among those to join the celebrations, which included a drinks reception and a celebratory cake.

Following the addition of a Marketing Manager in April, Stone’s Throw now employs eight staff. Stone’s Throw Media was launched in 2011 by founders Mike Chinn and Matt Weston after they met on a University of Wolverhampton media course.

They have grown the company to provide services for clients across a broad spectrum of sectors, both in the West Midlands and further afield. The founders bill the business as being for clients “looking to grow” with video, animation and digital events.

In September, Stone’s Throw Media broadcast one of its most prestigious productions to date, a four-day international conference for the International Association for Hydrogen Safety (IA HySafe) and the Scottish Government. The agency has been instrumental in launching Creative Chain, a group for digital businesses in Wolverhampton, and Mike Chinn was named as a finalist for Online Event Producer of the Year at the CN Agency Awards, organised by industry title Conference News.

Matt Weston said: “Given the challenges for digital businesses to get established, it is pleasing to be able to mark 10 years with our most successful year to date. We have grown revenues and profits while extending the team with investment in new roles, including dedicated marketing resource.

“There is plenty more to come from Stone’s Throw Media as we are working with a leading national and international brand with the first fruits of our partnership to be made public in the spring.”

Mike Chinn said: “When we started Stone’s Throw Media our ambitions were to develop our own skills and make careers in video and animation. To have grown to our current level and employ a team of such talented people is a massive achievement. We are proud to remain in Wolverhampton, close to the University where we met, proving Black Country businesses can offer high quality services in the digital sector.”