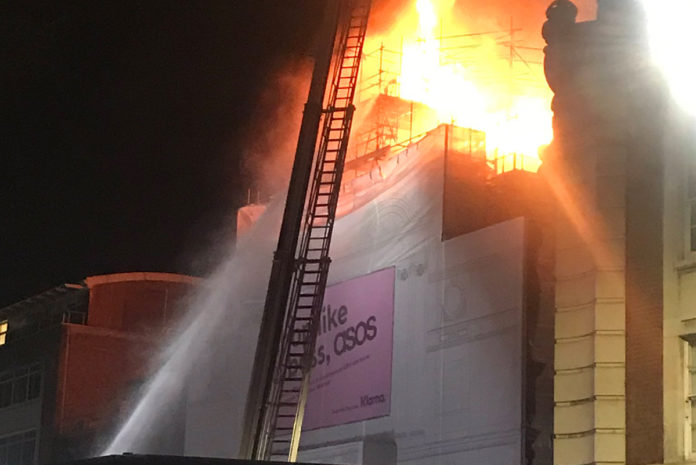 Renowned London music venue, KOKO in Camden, battled a fire on the roof last night as firefighters were called to the scene shortly before 21:00 on Monday 6th January.

Sixty firefighters descended on the venue to keep the blaze under control before extinguishing it at 02:30 Tuesday morning.

The London Fire Brigade told media that a third of the roof was alight at one point during the night.

It was closed for refurbishment when the fire broke out. It is understood no one has been harmed.

Venue owner, Olly Bengough expressed his sadness but added: “We’ll be doing our best to get the redevelopment of this iconic building back on track.”

A statement on the venue’s Twitter thanked the London Fire Brigade for its “swift action”.

The station commander, Jon Lewis, said: “Firefighters’ quick action and hard work in the early stages means the fire was contained on the roof and saved the rest of the building.”

Leader of Camden Council, Georgia Gould, said: “Heartbreaking watching the Camden Palace/Koko up in flames… a building that holds so many memories and means so much to us in Camden.”

The venue was due to open its doors again in spring 2020 after undergoing a “major, state-of-the-art transformation” according to its website. The refurbishment included a “complete renovation of the rooftop area.”

The building originally opened as the Camden Theatre in 1900 before becoming the Camden Palace and the Camden Hippodrome. It has welcomed the likes of The Rolling Stones, Ed Sheeran, Madonna and Coldplay through its doors.