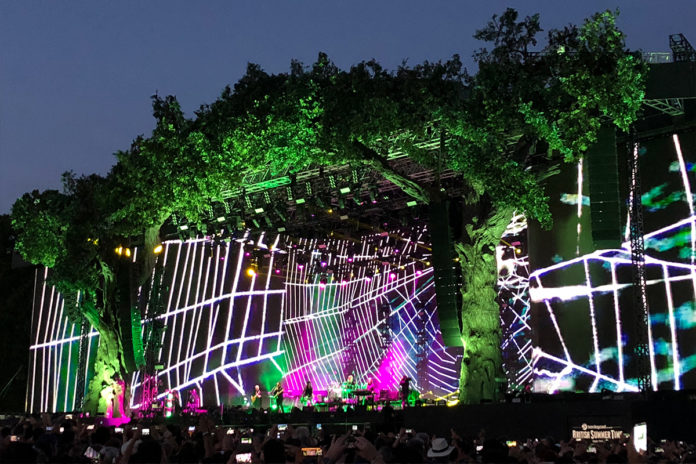 Appointed in November 2012, AEG invested in infrastructure, plumbed in toilets front of house for example, while Es Devlin brought Jim King’s want for a main stage identity ‘sympathetic to the environment’ to bear in the shape of three ‘Great Oaks’ across the front of Star Events’ 25m VerTech platform. And production – big, sharp, accurate sound courtesy of Martin Audio/Capital, AEG tellingly turning the stage away from the neighbours, and nearly 1,000sq m of Chaos Visual Productions/Video Design LED screen among the core ingredients.

Alongside this came an apparently inexhaustible string of extraordinary headliners, Rolling Stones to Barbra Streisand via the likes of Libertines, Blur, Taylor Swift, Massive Attack, Stevie Wonder, Roger Waters and the Cure to name just a handful, all of them replete with stellar supporting casts.

BST Hyde Park is themed environments across the site, free cinema and free to attend community events too. The revolution just went on and on.

With the promoter for 2020 and beyond still to be confirmed, Event Industry News caught up with Proper Productions’ Mark Ward, BST’s production director, who has looked after the Great Oak Stage since 2013.

How much has your job changed at BST Hyde Park?

“We started running main stage and production on main stage only, now we run stage two, stage three and artist liaison, with Loudsound, as well. Driven by making everything as artist facing/artist friendly as it could possibly be, me and Franksy (Andy Franks), who runs artist liaison for this squad, come from the world of taking headliners to festivals, that’s what we’ve done all our lives, so we bring the team in.”

Before a headliner comes through the British Summer Time gates, how long have you been in discussion with their ‘people’?

“For months and months, which takes finances, a bunch of time, people with the skills and the experience to figure it out and AEG backing us to do what needs to be done.”

How is BST Hyde Park different behind the scenes?

“The reason those jobs maybe don’t get done as well [elsewhere] is because nobody’s getting paid to do them; the advancing process is all done in three weeks rather than three months and the amount of time and banging away at the detail that it takes to make a show that complicated work in a field doesn’t just happen.

“I think AEG saw from day one that in order to bring artists of real calibre through this series of events BST had to run at a higher level. That’s why the A team has stayed together, because they have the resources they need and the support services they need to deliver a good job.

“And every artist in 2019, bar none, left saying ‘That was a great day, thank you so much for making it easy.”

You’ve had a series of different main stage models, none more radical than 2018?

“Part of the reason the team we put on this enjoy it is because our answer to those challenges is always ‘We’ll find a way’. Roger Waters’ production asked us some big questions last year and we managed to answer them as well as delivering a festival environment, or a multi-show environment, that worked for everybody else’s production.

“We lost what’s in-jokingly called the VIP tree, which is the one that faces the VIP world, to give an even bigger video surface. It looked better so we maintained that shape.”

“We made more changes to the model this year. It’s always about learning lessons, moving on and doing something better.”

How easy is it to take an artist like Neil Young’s production brief and make those ends meet?

“Neil Young always has the side fills, he always has the flying bird, which is a keyboard. Whether those things are real or whether they’re in his brain ‘I want to see my speakers there because then I know it will sound good’ is not for us to question. We made sure the motors were up, that it looked good and that we could switch it in the changeover so they weren’t hanging there all day.

“If an incoming production has things we need to question, we will always question them but we understand that for artists like that, that’s how they do it. We can argue that may not be the best way but it’s not going to change so we facilitated it. We made this enormous video screen available to Neil Young and to Bob Dylan this summer and they chose not to use it whereas Florence, with the help of her amazing design people, created a completely bespoke visual show to use the 982sq m of video screen and that’s from one show to the next, overnight. Then Robbie Williams puts a 64ft thrust in and has a load of bespoke content that he’s made and a bunch of extra lighting. That’s what we do.

“I still go to a bunch of the biggest festivals in the world looking after whichever artist it may be and for AEG to have come up with an idea that’s still where it is seven years after the fact is remarkable. Has anyone shown us a better version? I don’t think they have.”

Riddled with ‘politics’ and complexity it might be, Hyde Park is London’s prime outdoor space for live music plus. No surprise then that Live Nation Entertainment – Hyde Park tenant from 2001 to 2012 – stuck its foot in the door after Royal Parks awarded AEG Presents a new six-year contract at the site.

Both announcements came late though and, however long the legal appeal lasts, it’s a painful stamp on bookers/suppliers’ crossed fingers.