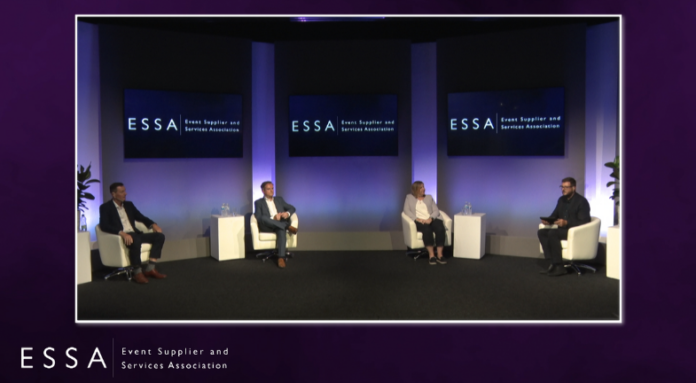 The Event Supplier and Services Association (ESSA) held its AGM online for the first time in the association’s history, on 15 July, welcoming 95 delegates from 84 companies into the Slido meeting, with both the official business of the day being conducted online, including the announcement of the election of 4 board members, followed by an interactive Q&A panel.

Following member companies logging into Slido, there was a brief welcome from Andrew Harrison, ESSA director, followed by a short video reprising the activities of the association and members in 2019, a stark contrast to 2020.  Then began the official business of the day, Martin Cairns made the chair’s address, which was followed by the financial report from Treasurer John Robson both of which touched upon the successes of 2019 and the challenges facing the industry in 2020.

After the official reports it was the annual election of ESSA board members. Because the AGM was held online, the nomination process and elections were all conducted remotely, fortunately, the ability to hold online elections was passed at the 2019 AGM. For 2020 all four available places on the board rotation were contested. The results were announced and Dan Edwards, group operations director at Mash Media, and Jason Stead, managing director GES (EMEA) were re-elected to the board, whilst Marija Erzen, director of Solutions2 and Elizabeth Turner, sales and marketing director of The Event and Exhibition Partnership were newly elected to the board.

Following the announcement of the election results, the official business of the day concluded with the passing of an amendment to the code of conduct to bring it in line with the recent agreement between ESSA and A©ID (Anti Copying In Design).

With the AGM officially drawn to a close there was an interactive Q&A panel discussion with ESSA chair Martin Carins, vice-chair Lou Kiwanuka, treasurer John Robson and director Andrew Harrison. Members submitted questions via Slido for the panel, the subjects that dominated the discussion were diversity and inclusivity, mental health, Covid19 and the opening up of the events and exhibition sector.

After the AGM, ESSA director Andrew Harrison commented, “The move from a live event to one via Slido translated very well, attendance of both individuals, and companies represented, was very similar to many recent AGMs. And, I am delighted to say that our membership once again rose to a challenge and delivered as good an AGM as possible, we are a face to face industry and I understand that this is not our native medium so I would like to thank everyone for getting behind this and making it a success.”

“We hope that this year will be a one-off and it will be the only time we are forced to hold an online event. We are, after all, a face to face industry,” he concluded.