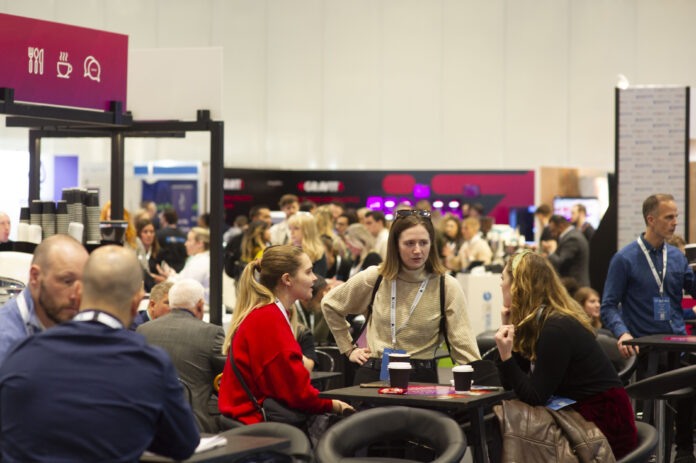 Heading east to Event Tech Live (ETL) was natural enough, but to ExCeL? The exhibition superhighway? How would ETL 2022 cope with the transition from multi-room landscape to one pillar-free flat floor? In short, wonderfully well.

There’s still a significant queue for entry an hour after doors and inside Hall N10 – ExCeL’s coolly efficient numbered geography belies the arcade-style innovation and content mix inside.

For all the inspiration, direction and true sustainability event tech delivered through lockdown-era, the inspirational and the inspired are clearly delighted to be back in-person, under one huge roof.

As ever, content and education is everywhere. The Main Stage, at the back of the hall, hosted by Matt Coyne latterly of Waves Connect, opens with ‘How Slack uses Slack to organise its own events and build community’. Marketing director Graham Forsyth, a relatively recent addition to the company, explaining the system’s capacity to deliver its European conference, Slack Frontiers, at the Brewery in October without a single email. A truly ‘wow’ 10am moment.

The Silent Seminars’ headphones, hanging on every seat at every stage, with spares for numbers beyond those capacities, a frequent occurrence, cut away the considerable ‘noises off’ and highlight the sense of really being there. It’s a trick Event Tech Live embraced right back in 2015 but seems to bring still more to the party in this new space.

At the Tech Talks Theatre, opposite end to the Main Stage, it was worth catching Jason Larcombe from White Light, Preevue founder/MD Ryan Metcalfe and Bryony Michison from the Science Museum discussing LiDAR laser scanning and digital twin tech and the enormous impact that’s had on the Science Museum’s event offering.

Illuminate, the only dedicated event space at the Science Museum, opened in 2019 to significant noise only to stop again, like everything else, in March 2020. Preevue’s digital twin idea generates an accurate, really strong representation of the space allowing organisers to see what the event they’re planning would look like, without them setting even a foot through the door. A significant accelerator for the venue when the flag finally dropped again late 2021.

Using Point Cloud, the Preevue team creates a ‘3D dot-to-dot’, a foundation for its team of artists to join together and represent the venue, down to a couple of mm detail. “Two or three hours on site – we’re in, we scan and we’re out,” Ryan Metcalfe said.

Making best use of data, an ever-evolving equation, is everywhere in event tech and ETL 2022 highlights the ‘where next’ in pretty much every corner.

Discussing ‘The age of smart events’ on the Main Stage, where the focus was primarily conferences and business events, in step with the audience, panellist Agnes Morgan put it simply, “If content is king, data is the queen.”

On that trajectory, the last Day One session in the Engagement Theatre: What is Web5 and why should you care? saw Jason Scott from KOPUS and Buzzmint co-founder Charles Symons display extraordinary, eye watering, nous, dissecting the journey to Web3 and what that means before Jason introduced its potential next step, the evens skipping Web5. A term first mentioned by Twitter co-founder Jack Dorsey as a straight ahead ‘one blockchain, one mission one plan’ next step in the face of all the multiples.

While when that might happen, who might trigger it, remains to be seen in this era of Jason Scott suggests it should be, “by the people for the people”.

A whole lot of learning then at Event Tech Live 2022 Day One. Brilliant people in a perfect space meeting questions with solutions. And there will be more of all of that tomorrow.

The weight of sessions worth dropping in on include, ‘The art of analysing data for better event experiences’, ‘Event tech procurement: potential pitfalls & strategies for success’ and ‘Event technology at scale – How Bloomberg leverages technology across a global events program’. Also, look out for the Launchpad Competition finalists: Kickback Space, Walls.io and AccessLOOP who will pitch their ideas to the judges on the Main Stage, live and direct.