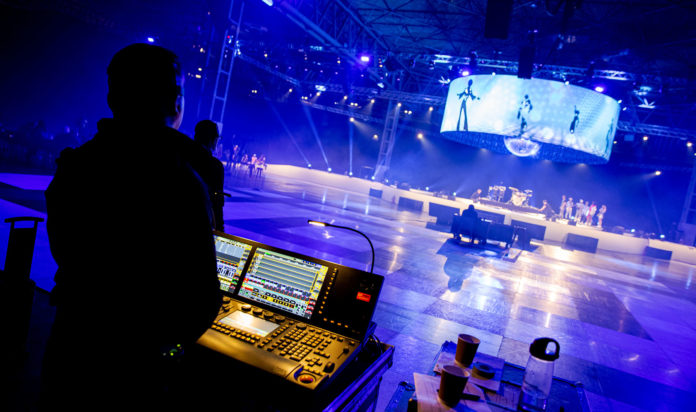 Technical production specialist CPL was poised to deliver an elaborate show environment to event organisers Pandora Events for a motivational event and sales conference occupying Hall 4 of the NEC Birmingham, UK, complete with in-the-round staging, live band, dancers and roller-skating artists and high-level presenters – for 2500 guests … when, during the dress rehearsals, Covid-19 intervened …

… the latest UK government advice – at that time, 10 days before the national lockdown came into force on 23rd March –  was announced, and organisers took the unanimous decision to stop guests journeying from all over the UK to be there …

Instead, with under 24 hours’ notice, the event was transformed into a 4-hour webcast.

The band still played, the dancers moved and grooved, and the skaters gyrated and glided – all the routines were pre-recorded by CPL’s video / camera crew and inserted into the webcast – keeping the good energy flowing across the ether.

The most successful delegates were recognised for their achievements and sales and the new season’s products revealed … all in a near surreal setting for CPL’s project manager Mike Radford and their up to 70 crew (during peak times) who were working on the event’s combined technical aspects.

This included locals from Crewsaders … who were “nothing short of amazing,” stated Mike.

The get-in had originally commenced on the Wednesday for the Saturday showday. The design theme – initiated by producers Vanessa & Andrew Carter from Pandora Events – was “Disco” in a Starlight Express vibe, oozing glitz and glamour and pumping disco beats.

The stage was built in the centre of Hall four, an 18-meter diameter circle with an 8-metre revolve in the middle and runways coming off two sides.

A 12m diameter circular main truss in the roof above was clad with 3.6 metre deep Roe CB5 LED panels covering all 360 degrees seamlessly, and in the centre of this – without which no self-respecting ‘disco’ set would be complete – was a 2.8 metre diameter mirror ball on motors.

Around 200 lighting fixtures installed on the circular truss and a collection of outer trusses rigged in the roof around the stage including 130 moving lights … part of a design by Mark Jones and Iain Wood, with a grandMA2 console for control in readiness for the full tilt all-action show that everyone was expecting to unfold!

The original event format comprised three sections – recognition, achievements and incentives, which was followed by the new product launches, and then an after-show party all of it interspersed with the various live entertainment segments.

Instead … for the webcast, the huge glitter ball was lowered down to ground level and the three presenters – dressed like disco divas – sat in front talking to camera in a pop-up TV studio-style space.

The live camera feeds were cut in with the recognition VTs, trip launches and product slides.

The live camera director was Derek Gruszeckyj who had four Sony HXC-100 channels into CPL’s Panasonic HS410 PPU. The playback video including all the recognition play-ins plus assorted graphics was programmed onto a disguise server – all created and sized exactly to the correct pixel count, with a Barco E2 used for all the switching and screen management.

For the webcast three monitors were positioned onstage displaying multiple outputs including now and next slide, the running schedule, count down timer, feed to web etc … also fed from the E2 … so the conversion from live show to studio was properly complete.

A large L-Acoustics sound system comprising of over 70 x KARA speakers plus KS28 & SB18 subs had been installed and ready to go for the main event, a little over the top for a studio, but it sounded fabulous all the same!

Completing the visual picture were also several special disco effects rigged-and-ready to go, including Galaxis G-Flames and Sparkulars … And a showstopping confetti effect scheduled for the finale, firing through 40 devices in a flourishing left to right canon sweep of the massive room!

A ceiling to floor laser cage effect was created with AC-MFL multifunctional lasers located on the circular truss.

CPL supplied a Riedel Bolero wireless comms system with four separate rings which were needed for this set up to cover cameras, production, audio and stage management.

Mike commented, “Although we were already aware that the Covid-19 situation was volatile and could change at any minute, when the decision was taken to stop the audience for their own safety and well-being, everyone snapped into ‘save-the-event’ mode and also into being extra conscious about the safety of the working conditions.

The change in circumstances entailed a lot of quick thinking on the feet – all instincts for which our resourceful industry is renowned – but all worked together and were united in their determination to deliver a highly memorable event for the client.”