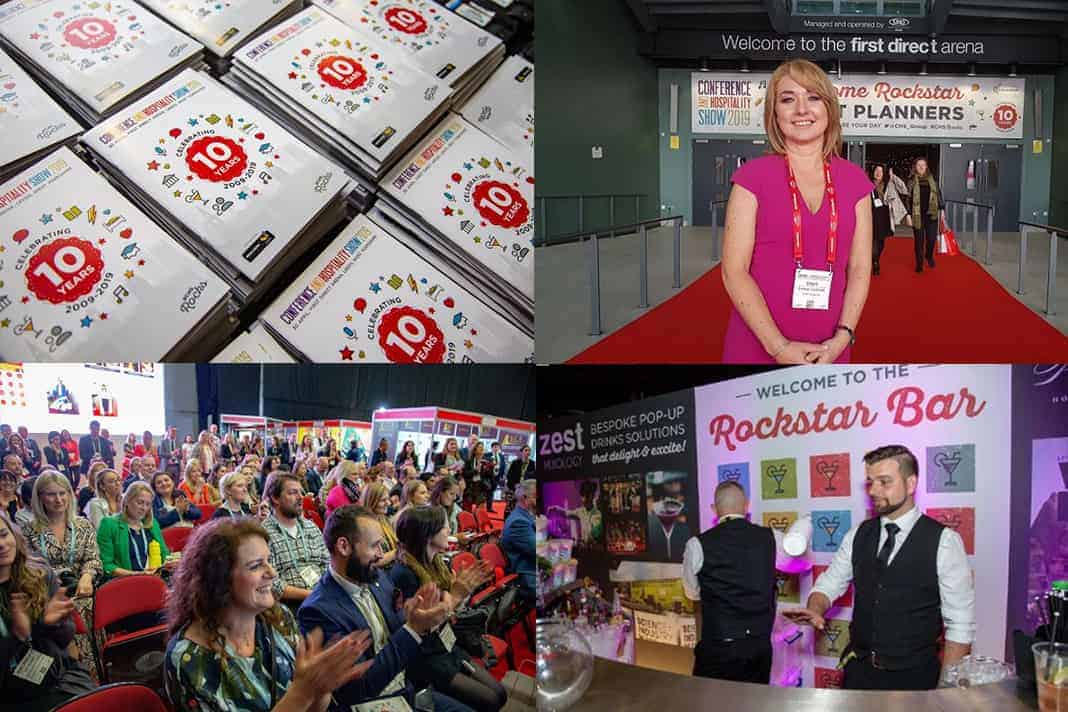 The signage has come down, boxes packed away and delegates, hosted buyers and exhibitors have made their way home, following a hugely successful and record-breaking Conference & Hospitality Show. Organisers were thrilled with the results and the great feedback they received from satisfied customers who thoroughly enjoyed the tenth-anniversary show at first direct arena on 30th April 2019.

As to be expected on a tenth-anniversary party show, the VIP bar was extremely busy, providing superb brand awareness and positioning for key sponsors, Zest Mixologist. MD, Murdo MacLeod was delighted with the response, he said: “It’s a been a big success and very worthwhile over the last two days. It’s the opportunity to connect with relevant buyers for our product and have them all in the same place and in a really friendly space. London shows certainly have scale, but I find this is really conducive for building sales relationships.

“It’s beyond the expectations we have around how many relevant people we can connect with and what return we can get. Live enquires have exceeded anything we’ve ever had from a show before.

“The biggest response we’ve had today has been to the flair element from our cocktail bar tenders, with everyone cheering and bringing the whole thing to life, and hotel buyers saying it’s the next level for bar-tending, and ‘we need this at our events.’

“It’s been very successful and we’re also proud to be involved at the level that it is for their tenth anniversary. It’s a big show and as the headline sponsor and associated with the VIP environment, it’s been bang on for us.”

The CHS19 tenth-anniversary show was predicted to be a major event, when exhibition space had virtually sold out before Christmas 2018. Pre-registration was up 10% from 2018, footfall increased by 10% YoY with a record-breaking 1350 attendees at the show and 74% conversion rate from pre-registration to show attendance.

Judging by some of the responses so far, 2020 is already shaping up to be a big event too. Theresa Ring, of Visit Scotland, said: “We love CHS, as it is such a strong platform to showcase Scotland as a MICE destination to a large and relevant audience. We caught up with lots of existing clients and made some great new connections too. This was a really good event for us, and we will definitely be back next year with bells on.”

The CHS team promised a major event and they didn’t disappoint.  Delegates enjoyed a packed schedule of events including keynote talks from celebrity TV Chef, Simon Rimmer, the PAs, PA, Nicky Christmas and Carol Ann Whitehead, who delivered an excellent session on true diversity in the events industry.

Jacob Scroby, Account Manager, Eventologists, said: “It’s such a good show, well organised and we love working with the CHS team, it’s always very slick and professional. The vast selection of exhibitors and attendees is such a draw and its always one of the first shows to confirm for our calendar”

For a succession of CHS first-timers, it was a great event, and one that is likely to see a return visit. Event Prop Hire sponsored the first direct arena level-one concourse. For Marketing Coordinator, Sophie Calpin, it’s paid off, she said: “It’s been a great show, it felt like the perfect year to be involved, alongside our recent move to our new Wetherby-based head office, a massive milestone for us, we really wanted to exhibit at a Leeds based event to get our brand out there locally.

“CHS19 has been a fabulous opportunity for us to do that.  We’ve had fantastic footfall and lots of enquiries whilst we have been here. It has definitely been worthwhile but also lots of fun, there was a really great buzz about the place.”

Richard Smith, director of sales, Wyboston Lakes Resort agrees, he said: “The industry turnout has been positive and we’re gaining great interest in our newly transformed Woodlands Event Centre. It clearly shows that the UK hospitality sector is buoyant and is continuing to go from strength to strength.”