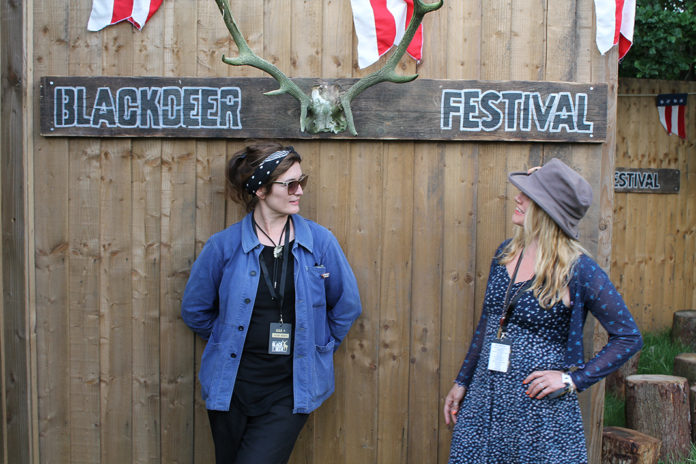 The Event Industry News team was invited to the award-winning, country and Americana music festival in Kent. There, we spoke to festival co-founders, Gill Tee and Deb Shilling, toured the backstage area and got an insight into the brand-new cashless system.

Gill and Deb were in their element; joking around backstage and revelling in the masterpiece that was the second edition of Black Deer. Though they described themselves as the “old dears” of the event, they had all the light-hearted humour of happy schoolgirls.

Discovering a gap in the market for a country and Americana festival, Gill and Deb followed their passion for the genre to rectify the problem.

Though Eridge Park is beautiful, Gill described it as “difficult” to work with due to its uneven landscape. Undeterred, the two life-long friends set to introduce smokehouse cooking, campfires and authentic country music to the rolling fields.

Following the success of the first edition of Black Deer last year, Gill and Deb added to the event to make it even bigger. Festival ticket sales doubled between years one and two, with glamping and campervan slots being sold out.

Taking the bold move to go completely cashless, the duo enlisted the help of PlayPass to supply and monitor the RFID cashless wristbands, onto which fans could pre-load money to pay for food, drink and merchandise.

Ben Wild-Herons, project manager for the UK at PlayPass, spoke to us about integrating the cashless system into Black Deer when the team came on board in February.

“The first thing we started working on was the accreditation system,” he said, explaining that PlayPass’ RFID was used for staffing and crew, as well as the cashless system for the bars and vendors.

attend2IT, an event IT solutions company, provided the WiFi connectivity that powered all PlayPass’ EPOS systems.

Assisting with the integration of this technology was Black Deer’s operations director, Chris Russell-Fish, who helped manage the technology throughout the site. Part of this involved integrating the RFID wristbands and WiFi with the merchants, vendors and bars on site, as well as the festival app.

Describing connectivity with customers as “vital”, Chris stressed the importance of creating a seamless and reliable transition to RFID, particularly as it was a first for the festival.

“Seeing the cashless system in action, my initial nervousness about it went away pretty quickly. My first impression is that it is so seamless, and everyone seems very happy about using it.”