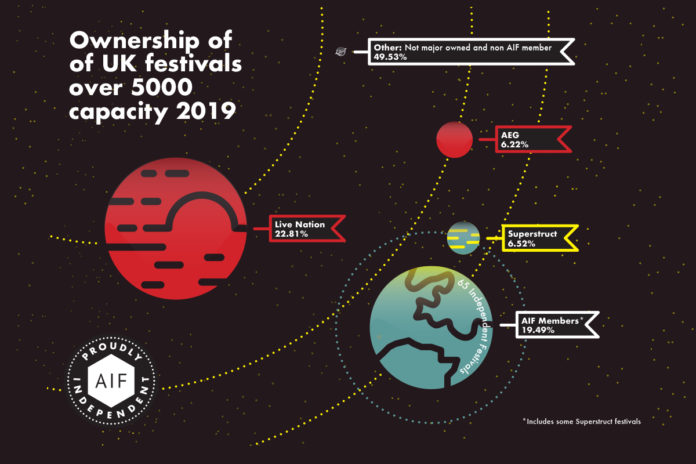 The Association of Independent Festivals has today launched an updated festival ownership map at its annual Festival Congress event in Sheffield.

The map shows several shifts in the sector in 2019, revealing that almost 30% of the UK market is controlled by transnational companies Live Nation and AEG presents.

AIF’s 2019 ownership map illustrates that Live Nation owns or controls 22.81% of the sector. Due to the overall growth of the market, more data becoming available and the cancellation of Rize festival (90,000 cap), Live Nation’s overall share by capacity has decreased from 25.26% in 2018 – despite the major company making further festival acquisitions in 2018 and 2019 including Camp Bestival and Rewind.

The gap between Live Nation and its nearest competitor, Superstruct Entertainment, is now 16.29% after Global exited the festival business earlier this year, with its events being split between Broadwick Live and Superstruct.

Superstruct is now the second biggest operator in the field, with its share of UK festivals over 5,000 capacity at 6.52%. The company entered the UK market through taking majority ownership of a number of festivals formerly owned by Global Festivals including Boardmasters, Victorious, Tramlines, Kendal Calling and Truck Festival.

Superstruct is followed by AEG Presents, which has increased its market share to 6.22% (up from 5.00% last year).

29.03% of the market is owned by AEG and Live Nation, both US headquartered transnational companies.

By comparison, AIF members (which includes some but not all UK Superstruct festivals in its membership) account for 19.49% of the market over 5,000 capacity. The remaining 49.53% consists of festivals not major owned and non-AIF members.

The map is based on a capacity survey of 210 UK festivals over 5,000 capacity, with an overall capacity of four million three hundred seventy-one thousand one hundred and eighty-three.

AIF CEO Paul Reed said: “Despite some significant shifts in the UK festival market over the past year, the dominance of Live Nation remains hugely concerning. It’s our intention to carry out this competition health check for our sector annually to track the industry and in order to keep attention on this important issue.

“AIF is a growing community now representing almost 20% of festivals over 5,000 capacity in the UK, and the independent sector is in a strong place despite the encroaching and unrelenting dominance of the major companies and the restrictions that can arise from this.

“However, we repeat our warning: Allowing a single company to dominate festivals, and the live music sector in general through vertical integration results in a stranglehold that stifles competition throughout the sector.”