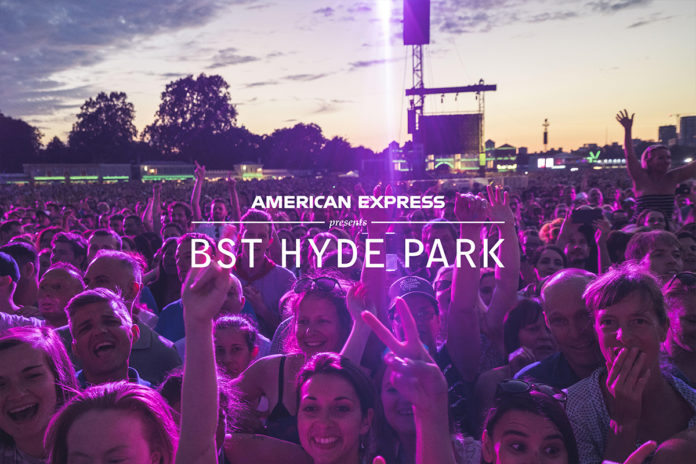 The new partnership with AEG, and brokered by AEG Global Partnerships, further cements the commitment of American Express to back Cardmembers at the key cultural moments that align with their passions.

The festival, now named American Express Presents BST Hyde Park, will return in July 2020 with yet another world class festival experience and line-up. American Express Cardmembers will have exclusive pre-sale access to tickets to all of the shows and a range of on-site benefits at the festival.

Paul Samuels, EVP of AEG Global Partnerships, said: “American Express is a valued partner of ours and I’m thrilled that the success of our relationship has expanded to the new signing of our flagship festival. They offer Cardmembers and fans access to the very best events and the addition of American Express Presents BST Hyde Park, will further connect fans to unforgettable live AEG experiences.”

Brandy Sanders, Vice President, Global Entertainment Partnerships & Experiences, American Express, said: “We’re excited to bring American Express Experiences to the heart of London culture this summer, adding BST Hyde Park as a partner. From first access to the hottest tickets, to truly unforgettable experiences, we enhance the moments that bring our Cardmembers closer to the music and artists they love.”

AEG launched the BST Hyde Park series of concerts in 2013 with a headline performance from one of the biggest and most iconic bands on the planet – The Rolling Stones – the first time the band had been in Hyde Park since their historic 1969 show.

Since its inception, the event, which the company has grown to become one of the world’s premier festivals, has featured an incredible array of global superstars. One-off moments have included Paul Simon’s last ever UK gig, Carole King performing her classic album Tapestry in full for the first time and Barbara Streisand making a rare live appearance. From Taylor Swift and Justin Bieber to The Cure, Roger Waters, Michael Bublé, Céline Dion, The Strokes, Florence + The Machine and Bon Jovi the line ups have always been immense. Each day features a huge range of artists across the bill, supporting emerging talent as well as established names.